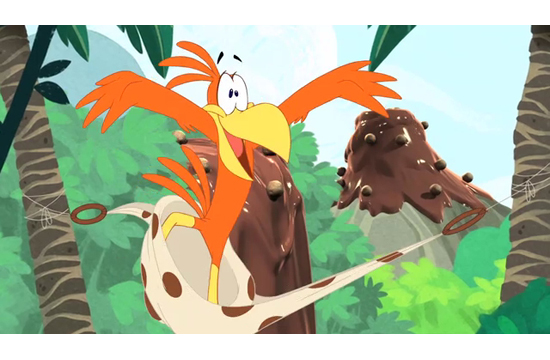 Life is good on Chocolate Island – unless of course you’re Sonny the Cuckoo Bird, the popular brand icon associated with Cocoa Puffs cereal. In the new spot, 'Chocolate Island', produced by animation experts Calabash Animation, Sonny’s attempt to get away from his Cocoa Puffs obsession leads him to a tropical island, only to find temptation from three chocolate Tiki heads and a volcano over-flowing with chocolate lava.

“For this we wanted to tone Sonny down just a little bit and not have him whip around the screen from the get-go,” Wayne Brejcha, Calabash creative cirector said. “We took a less-is-more approach and focused on showcasing the deliciousness of the chocolate lava and movement of the Tiki statues.”

Marking the first time Calabash has worked on a Cocoa Puffs spot for the US market (they’ve worked previously on Cocoa Puffs spots for the Hispanic market). The new spot was animated in CG, but features a cel animated main Sonny.

'Chocolate Island' opens with a shot of Sonny relaxing in a hammock near a picture-perfect waterfall in a tropical rainforest. After noting how “on this deserted island I won’t go cookoo for…” suddenly three Tiki statues named Crunchy, Munchy and Chocolatey” start chanting “Cocoa Puffs, Cocoa Puffs.” As the Tiki statues tempt him, Sonny begins lose it – first seeing chocolate lava flowing from the volcano and finally pin-balling hilariously between three palm trees screaming his familiar catch-phrase “I’m cookoo for Cocoa Puffs.” The spot ends with Sonny and the Tiki statues enjoying a bowl of Cocoa Puffs.”

For Executive Producer Sean Henry, the most challenging component of the spot was figuring out the movement of the chocolate Tiki heads: “We experimented quite a bit with their movement and facial expressions,” Henry says, “but the more we played with them, the more we felt they looked better when they moved in rudimentary ways, with simple mouth movements – they are after all made of chocolate.”