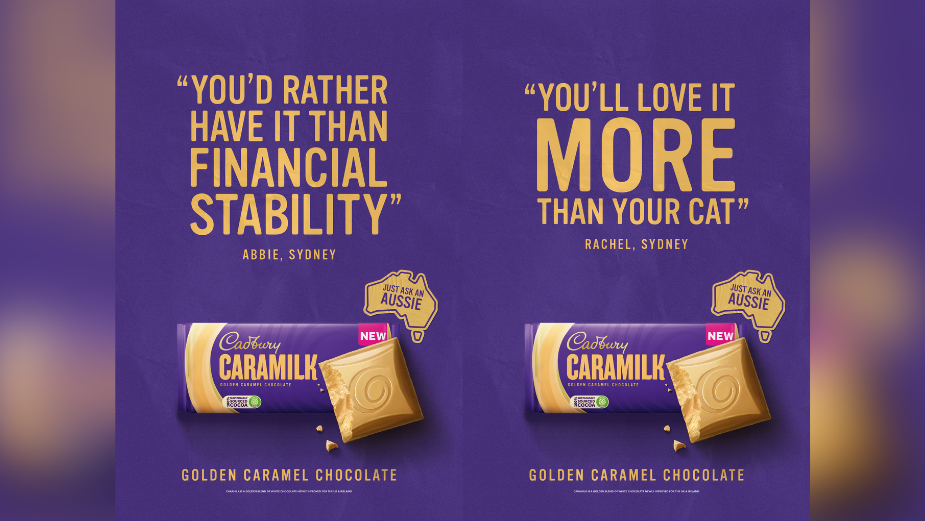 It’s not often that chocolate is catapulted to elite status, but one of the Australians’ favourite chocolate bars, Cadbury Caramilk, has finally reached British shelves after causing quite a stir Down Under. Such was the demand for Caramilk, that it was hoarded and even rationed by shops in Australia.

To promote Cadbury’s biggest new product launch in years, Mondelez and global creative agency, VCCP London, today launches ‘Just Ask An Aussie’. The integrated campaign heroes real life quotes from Aussies which show the Brits just how much they love Caramilk, and encourages Brits to ask an Aussie for themself to find out what the fuss is all about.

Targeted at UK millennials, the bold and disruptive integrated campaign will run for two months across DOOH, OOH, Facebook, Instagram, Twitter, TikTok and YouTube. Rather than the brand peddling its own products, VCCP London handed the mic over to diehard Aussie fans who shared their seal of approval with bold claims about Caramilk such as “you’ll love it more than your cat”, “you’ll think about it while eating other chocolate”, and even “you’d give up your gran for one”.

Cadbury will also roll out a series of high impact DOOH sites, such as Waterloo Motion, that hero real tweets and playful social posts from loyal Aussie fans who have confessed their love of Caramilk to their followers, and are now tasked with the job of flying the flag in the UK.

Beatrice Berutti,  brand manager at Mondelez International said: “It’s been months in the making, but we’re excited to finally launch Caramilk in the UK. After seeing the social media storm of Aussie fans’ reaction to our Caramilk bar we just knew we had to add this much-loved classic to our UK chocolate bar range.”

Chris Birch, executive creative director at VCCP London added: “It’s not every day you get to launch a chocolate bar as ace as Caramilk, so we were excited to welcome our Aussie cousin from down under to British shelves. And when you've got Aussies like Ravi from Melbourne saying he’d give up his Gran for one or Romelie from Perth saying she'd like a sofa made out of it, well we had to use their delicious advocacy."