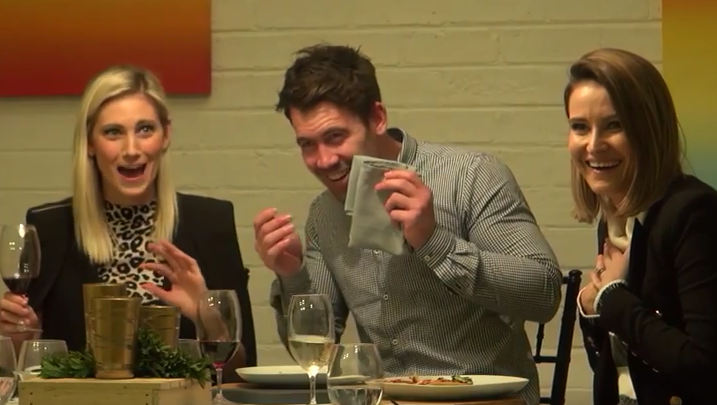 The special event, hosted by BWM Dentsu and its affiliated consumer PR company, The POP Agency, was held in Melbourne last week.

AFL celebrities, bloggers and foodies were invited to have dinner in the dark at what they thought was a modern pop-up restaurant. Unbeknown to the diners, as they were eating their pizza in the dark, the restaurant set rotated and was transformed into a lounge room.

Once the guests had eaten their fill, the second surprise was revealed – the gourmet pizza they had enjoyed was, in fact, Dr. Oetker Ristorante frozen pizza!

The diners’ reactions when the lights were turned on really capture the twists of Scuro Ristorante.

Murray White, executive creative director, BWM Dentsu Melbourne, said: “We knew with a campaign for frozen pizza we would be going up against a lot of preconceived ideas about quality and taste. In order to get past this common perception we decided to literally keep our guests in the dark about what they were eating.”

“Dining in our dark pop-up restaurant allowed people to let their tastebuds do the decision making and proved that Dr. Oetker Ristorante pizza is such a premium product that it rivals fresh, professionally cooked pizza,” White said.

“We’re confident we can maintain this messaging throughout the advertising campaign and introduce more Australians to the idea that you can have restaurant-quality pizza in the luxury of your own home.”

“We know household penetration of frozen pizza in Australia is low compared to other developed markets. We wanted a way to convey that frozen pizza doesn’t have to be a compromise, and to do this an engaging and challenging way. The Scuro Ristorante event was a first step towards positioning Dr. Oetker Ristorante as a positive choice that offers consumers convenience without compromising on taste and quality,” Wyatt said.

The Dr. Oetker Ristorante campaign will run across TV, in-store and online.