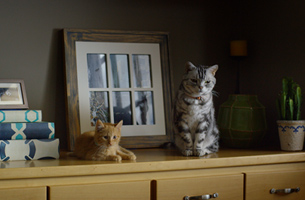 In this 60 second commercial the all-knowing Cat returns to impart wisdom on Kitten about the Big Game and how to survive amidst humans’ weird game-day behavior. A component of Friskies unique distribution strategy, the ad will only be seen in three local markets that include the following cat-themed cities:  Kitty Hawk, N.C., Los Gatos, Calif. and Pawnee, Neb. The spot will debut and air on local NBC affiliate stations in each market on Sunday, February 1 during the game.

“We are excited to work with BuzzFeed Motion Pictures’ Branded Video Team on another installment of Dear Kitten, and even more excited that we’re adapting it into a TV commercial that will air during the Big Game, a first for both of us!” says Whitney Evans, Friskies Assistant Brand Manager. “Traditionally, every aspect of the game is geared toward humans, but we are using this opportunity to look at the Big Game through the eyes of a cat. The ‘Dear Kitten’ personalities, Cat and Kitten, will return to provide all cats with the ultimate survival guide for the Big Game. We think this video is hilarious and one of the best yet!”

"This franchise has not only been a huge success in terms of reach, but also of the deep emotional connection we've established with our audience," says Jonathan Perelman, Vice President of BuzzFeed Motion Pictures. "We're excited to introduce another glimpse into the mind of our wise, thoughtful and funny cat in Dear Kitten: Regarding the Big Game, and take this campaign to a television audience.” As we continue to expand our content and explore new platforms, we're thrilled to partner with Friskies and Purina on this exciting opportunity during the most-watched, live television event."

Friskies and BuzzFeed Motion Pictures have a history of collaborating together. This commercial is the fifth Dear Kitten video. Recognized by Digiday as the “Best Video Creative” in 2014, the original “Dear Kitten” video amassed more than 19 million views while the overall Dear Kitten series has over 30 million views.  It has also been dubbed one of the best branded content partnership videos of 2014, according to Jerrid Grimm of AdAge.