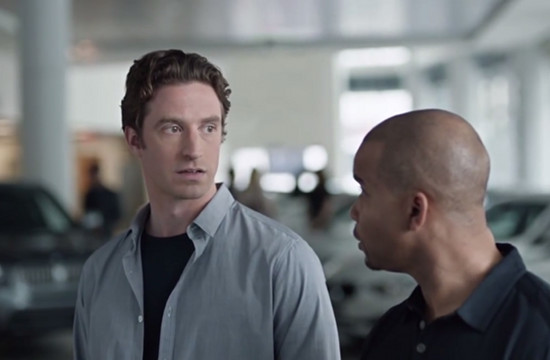 BMW and kbs+ launched an all-new television commercial featuring the BMW 3 Series and actress Brooklyn Decker. The ad is part of BMW's regional advertising buy during NBC's broadcast of Sochi. “Opportunity Knocks,” starring actress Brooklyn Decker, features the BMW 3 Series, the quintessential Ultimate Driving Machine that invented the Sports Sedan segment. This spot tells the story of a man who has previously let opportunity pass him by. Among other missed opportunities shown in a flash-back sequence, we see him break up with his nerdy high-school girlfriend, who in present-day, turns out to be Brooklyn Decker. When it comes to purchasing the BMW 3 Series, he is not going to let opportunity pass him by again.

“I was drawn to this BMW ad because of the humor. I was determined to play myself as a nerdy teenager – down to the braces and not so trendy clothes – just like I was in high school,” said actress Brooklyn Decker. “I loved being able to put some of my personality into the ad and I’m thrilled to have been a part of this project with BMW.”

“’Opportunity Knocks’ is a playful example of BMW’s focus on story driven creative,” said Trudy Hardy, Vice President, Marketing, BMW of North America. “Unlike the young man in the commercial who broke up with Brooklyn Decker, we want consumers to make the right choice the first time, especially when selecting their next vehicle.”

Kirshenbaum Bond Senecal + Partners (kbs+) is responsible for BMW of North America television and digital advertising along with social media activations, UM is responsible for media buying.  “Opportunity Knocks” is directed by David Shane and produced by O Positive.