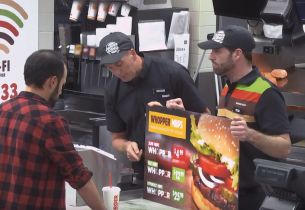 Following on from its poignant anti-bullying film from last year, Burger King has launched its latest in-store stunt - this time taking on the controversial Net Neutrality repeal in the US.

Created by DAVID Miami and directed by Kris Belman, 'Whopper Neutrality' brilliantly explains the somewhat complicated subject in a way that's easy to comprehend. Watch below as real customers get up in arms about being charged more for the same Whopper, at an expedited service.

Fernando Machado, Burger King’s global chief marketing officer, commented: “We believe the internet should be like Burger King restaurants, a place that doesn’t prioritise and welcomes everyone. That is why we created this experiment, to call attention to the potential effects of net neutrality.”