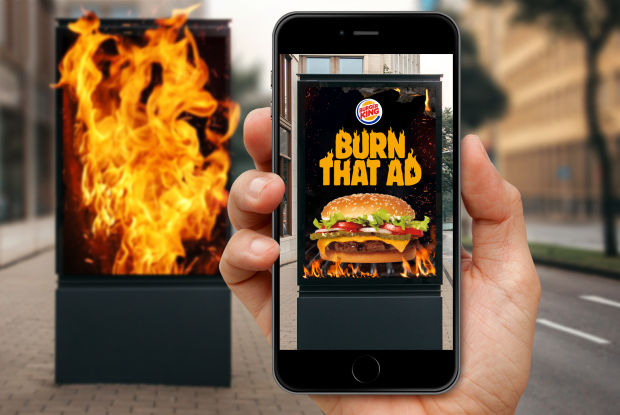 When it comes to teasing the competition and innovating in ad campaigns, Burger King pulls no creative punches. Now, with “Burn That Ad” anyone that launches the Burger King app, points their smartphone at its main competitors' ads may enjoy the sight of it being burned up instantly, in augmented reality, and turned into a BK ad. Doing so, the consumer is given a free WHOPPER to be savored at the nearest restaurant. The campaign is fully created and developed by DAVID SP.
Available on the BK app, the promo was created exclusively for Brazil to promote BK Express, a tech tool allowing any customer to pre-order and avoid lines. The strategy allows Burger King to turn the media investments of its main rival, such as billboards, magazine ads, discount coupons and others, into their ads of their own.
"Technology as a means to provide the best customer experience is one of our main investment targets in 2019. To create the BK Express experience, our exclusive payment technology via mobile phone available all around Brazil, we offer some fun interaction in augmented reality for our brand's lovers through the app. And those using the service also gets a free WHOPPER", says Ariel Grunkraut, Burger King's marketing and sales director for Brazil. Half a million WHOPPERS are expected to be given away all over the country.
“Augmented reality is a fascinating tool. And when combined with a little pyrotechnics, it is even better. With "Burn That Ad", we hacked the competition by leveraging our biggest advantage, which is fire", says Rafael Donato, creative VP for DAVID SP.
Credits
Production Company: (APP): VZLab
Team VZLab: Luiz Evandro, Giovani Ferreira, André Sernaglia, Eliza Flores, Marcia Sumie, Daniela Murai, William Queen, Yuri Cruz
Production Company: Café Royal
Team Café Royal: Manu Carvalho, Moa Ramalho, Camila Carrieri, Eliseo “Gringo” Alvarez
Production Company: Hogarth
Team Hogarth: Alexandre Sakihara, Ricardo Kertesz, Stephanie Valente, Marcelo Baptista e Dereck Denis, Fadel Dabien, Lucas Moreno
view more - Creative