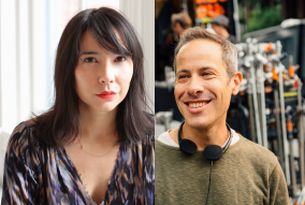 Bullitt has welcomed two award-winning directors to its roster: Sasie Sealy (left) and Jonathan Zames (right). Both are conversant in both long and short form projects, and work at the intersection of advertising and entertainment.

“Sasie is an exceptionally talented director who brings a photographer’s eye and a writer’s perspective to projects, and Jonathan is a masterful storyteller with work that is entertaining and connects beautifully to brand,” comments Bullitt EP Luke Ricci. “We are really excited to welcome both to the Bullitt filmmaker family.”

Sasie Sealy is director with a love of striking visuals and cheeky scripts. She first made her mark in the commercial world of fashion and beauty with clients such as Maybelline, Tory Burch, Suave, and Sally Hansen, and her work has been featured in Glamour, Refinery29, and Teen Vogue, among others. Sasie’s projects are known for transcending category by embodying an original vantage point or unique narrative facet. Sealy’s short films have screened at festivals around the world, and her work has won support from the Sundance Institute, New York State Council on the Arts, Film Independent, and the Sloan Foundation. A short with HBO in 2014 led to a chance to direct episodic television and her first DGA nomination for her work on Amazon’s Gortimer Gibbons’ Life on Normal Street.  In addition to her advertising work, now exclusively via Bullitt, she is currently in development on a pilot with Sarah Jessica Parker’s company Pretty Matches.

Director Jonathan Zames combines visual artistry and a comedy writer's edge in work that piques curiosity while delivering maximum impact. Humanity, technology and captivating imagery often align in unexpected ways in Jonathan’s projects, among them the 2017 Cannes Lion-winning Google 'Pride For Everyone.' His background as a screenwriter and cinematographer shape and inform his work for such noted brands as Canon, Luminosity, Glad, and Benjamin Moore, among others. Additionally, his experience as an award winning Creative Director for Google ensures work that makes brands stand out and accentuates their message authentically and playfully. Originally from Montreal, Jonathan lives in New York and works in Los Angeles, Europe and Asia, giving him a truly global perspective.

“Bullitt feels like a great fit for many reasons, including the opportunity to work with an EP as talented as Luke, and to be in the company of such incredible filmmakers,” says Zames. “And the chance to work on content that goes beyond traditional advertising is obviously a big deal too."

To find out more about Bullitt and its filmmaker roster, click here.