BULLITT Shows Us The Importance of Voting Wisely 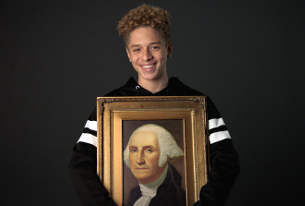 "When I Grow Up" is a project that reminds everyone about the importance of voting. On the eve of what many perceive to be the most important election of our lifetime, a team of people was inspired to unite and create a piece of shareable content that would not just remind Americans about the importance of voting, but also remind them of the Presidents that came before... and the powerful legacies they left behind. The Presidents who embodied qualities of true leadership and stood for principles that helped unite us as a nation.

A variety of Americans from all ages and all walks of life were invited to answer one simple question: who was the President that inspired you most throughout your life? Each subject chose a framed portrait from a table full of pictures of past Presidents and spoke about their selection.

In listening to subjects talk about these Presidents, what stood out was the consistent themes of kindness, strength, fairness, and the ability to bring people together — a far cry from what we’ve seen represented in parts of the 2016 election. The film aimed to remind voters to think about the example we’re setting for the next generation. Of the two candidates on the ticket, who do we think will do a better job at inspiring our children?

Directors Matt Ogens (BULLITT) and Steve Oritt approached Creative Director/writer David Blacker to help brainstorm a concept that could be turned around quickly and on a modest budget. They then called upon their talented and hard-working industry friends (Producer John Nguyen, Union Editorial’s Daniel Luna and DP John Tipton) to help turn the piece around in record speed.

video
When I Grow Up - Vote Wisely
view more - Creative