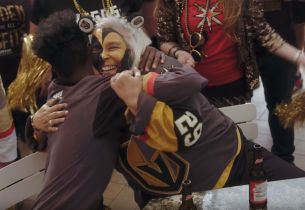 Now that the NHL season has comes to a close, Budweiser raises a glass to those who have raised the bar. Just two years ago, the Vegas Golden Knights were just an idea and, understandably, very little was expected of the team in its inaugural season.
While the Knights didn’t end the season with the Cup, the team rewrote NHL history and became the first expansion team to reach the Stanley Cup Final in 50 years.
Budweiser's new video celebrates the Golden Knights’ incredible season called “500 to 1: This Bud’s For Vegas.” The King of Beers proudly raises a glass to those who have raised the bar and celebrates a team that defied the odds all season, proudly supported by its city. The video walks viewers through the team’s improbable journey and path to the Cup and is set to “Shot At the Night” by the Killers, reinforcing its connection to Las Vegas.
view more - Creative