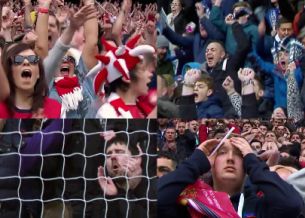 BT Sport today kicked off a new marketing campaign to celebrate its fourth season of football coverage. Titled “Four Competitions, One Venue”, the campaign will use footage from the Premier League, UEFA Champions League, UEFA Europe League and Emirates FA Cup to celebrate BT Sport as the only place to watch the combination of the four premier competitions.

Two adverts directed and edited by Luc Janin innovatively piece together key moments from the four competitions as though they are happening at the same time, creating the ultimate combination.

Following the success of the live stream of the UEFA Champions League final and the UEFA Europa League final on YouTube, BT Sport will continue to engage fans on social media. Working closely with YouTube and Facebook BT will personalise the new campaign on both platforms.  BT Sport has also produced individual VOD ads for all 20 Premier League Clubs to engage all fans with the same message.

This season BT Sport will also introduce “Goals Recreated”, which will see some of the biggest names in football, starting with Mahrez and Harry Kane, try to re-create their favourite goals from across the Premier League, Champions League, Europa League and FA Cup competitions. Clips will be used on BT Sport and on BT Sport’s YouTube channel.  Fans will be able to enter their own recreated Goal online to be in with a chance to win tickets to this season’s UEFA Champions League final in Cardiff.

Dan Ramsay, marketing director, BT Consumer said: “This is BT Sport’s most eye catching campaign ever and it’s also our most social. By personalising the content and working in partnership with different platforms the work will land our four competitions, one venue message in a way that’s relevant, engaging and will get football fans talking”