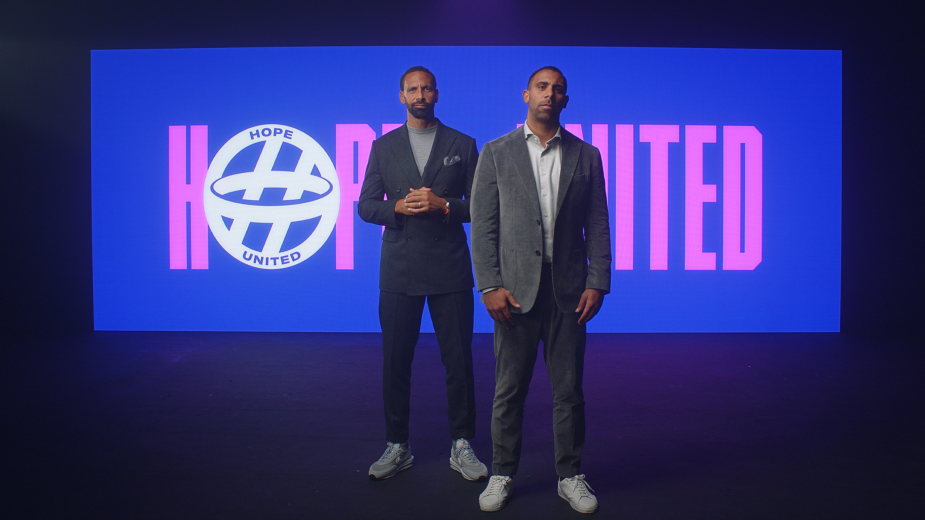 As part of a continued investment, focus and commitment to inclusion, BT is celebrating Black British history with a series of educational, entertaining and inspiring content across BT and BT Sport.

Earlier this year, BT formed Hope United, a diverse team of footballers who came together from across the Home Nations to educate the country on the digital skills needed to tackle online hate. As well as educating 3.7 million people across the UK on how they can reduce the amount of hate they see online, Hope United also created a groundswell of positivity and support for all players who have been victims of such abuse.

This month BT will continue its message of hope and inclusion, releasing a new series of bitesize educational films, featuring members of the Hope United squad who will be sharing their stories and online resources to help educate the nation on Black British history.

The first film released will see Rio and Anton Ferdinand discuss Standing Firm: Football’s Windrush Story, a documentary that premiered exclusively on BT Sport on September 28. The footballers, who both feature in the film, will point viewers to the BT Sport website and App where anyone will be able to watch this documentary for free to learn more about the legacy and impact the Windrush generation, their descendants and continued Caribbean migration, has had on English football and the national team.

Eni Aluko - one of Hope United’s coaches - will feature in the second episode in the content series, sharing her passion for football’s Black pioneers Emma Clarke and Laurie Cunningham, the first Black football player to represent England in a competitive international match. Eni will encourage viewers to visit Nubian Jak Community Trust – the only commemorative plaque and sculpture scheme focussed on commemorating contributions of Black and minority ethnic people in Britain.

The final film will feature footballer Marcus Rashford as he explores the important role literature plays in introducing young people to Black British history in their early years of school. The episode will see Marcus share recommendations and a carefully curated list of books for parents and carers to inspire and help children and young people discover more about black history and culture.  The list will be available on the Pan Macmillan website, www.panmacmillan.com and will feature books and resources by authors including Floella Benjamin, David Olusoga and Lenny Henry and illustrators such as Diane Ewen and Dapo Adeola.

Pete Jeavons, director of marketing communications at BT, said: “This campaign is another step forward in our mission to connect for good. Through our ongoing work with the Hope United team, and by using our channels, we will continue driving a message of hope, offering the nation online resources to educate themselves on Black British history. We launched Hope United in a collective stand against social media hate; this campaign sees us continue tackling this issue with action, education and a commitment to facilitating change.”

Rio Ferdinand said: “I joined Hope United because I want to help make a difference and beat online hate for good. I believe that education is the key to a more inclusive world and to help in the fight back against racism whether that is on social media or in real life.  I hope that by sharing learning from the past and the importance of black history we will build a more inclusive society.”

Will John, ECD at Saatchi & Saatchi said: “At the core of Hope United is the idea that education can be a facilitator for change, that education can bring hope. Hope United has the reach and influence to use social media for good, so it was great to work with them to help educate the nation through bitesize lessons about Black British history. It’s an opportunity for people to continue their learning journey by providing some inspirational resources from across the web, all curated by BT.”

All three pieces of content will drive viewers to bthopeunited.com where they can access resources to educate themselves further on Black British history.