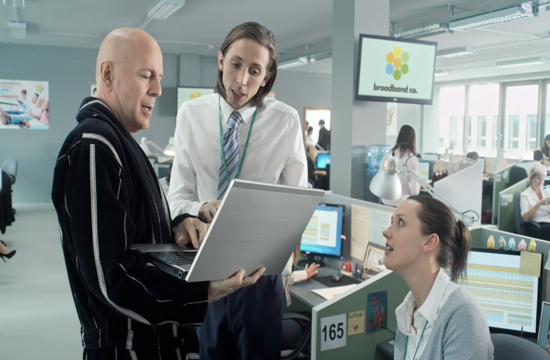 Bruce Willis is the star of Sky’s new campaign that launched on September 1st.
Directed by Hungryman director Bryan Buckley, the commercial sees Willis enter an office in his dressing gown, irritated by his broadband’s failure to load efficiently whilst trying to watch himself on a laptop. One hapless office worker tries but fails to suggest solutions whilst the heroine comes up trumps with the suggestion of Sky Broadband and is rewarded with Bruce himself.


The Whitehouse co-founder and editor John Smith edited the spot, which was from WCRS. He commented: “You have to get the balance right between the star and the other characters whilst also ensuring you do the brand justice. The other challenge here was trying to find an equilibrium between respecting the script, including good improvisation and making the narrative work.
“At the end of the day a star like Bruce Willis is a huge commodity. You want the money on the screen and include those Bruce shots that we all know and love from his movies. There’s a heritage to it and you want to honour that and do it justice. How you weave the girl in without her taking over is a delicate balancing act. Ultimately it’s a three hander but one that includes a Hollywood legend.”
In reference to working with acclaimed Director Bryan Buckley, Smith comments: “I love working with Bryan. There’s always a lot of funny material to work with. He’s obviously brilliant with comedy, but he also really pushes the envelope and takes risks. He’ll make it as funny as he possibly can before pulling it back.”
Finish did both post and grading work on the spot, continuing the high volume of quality work that they have produced since the launch of their new grading department.
Head of the department Paul Harrison said: “The look of this latest sky commercial had to be cinematic but not detract from the comedy. It also had to feel like a genuine office environment. We decided to play the cool steely feel of the office against the more vibrant colours of the broadband branding with the added warmth of Bruce Willis and office workers.”
The spot first aired during X-Factor on Saturday night.