Brothers and Sisters' Phil Teer on the "Rise of Manifesto Brands"

Awards and Events 794 Add to collection 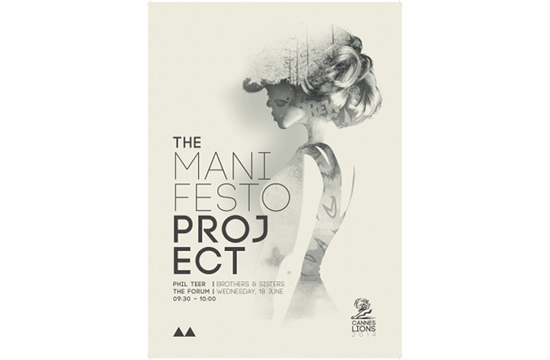 Ever fallen in love?  Chances are you didn’t plan it.  It was out of the blue, turned your world upside down and you’ve never been the same since.

Ever stumble across a work of art that blew your mind?  Perhaps it gave you a whole new way of seeing.

Remember turning on the TV the night the markets crashed and the Credit Crunch kicked off?  As the banks went to the wall did you feel a new, frugal side to yourself begin to take form?

Chance events make us what we are.

A new generation of brand owners have emerged since the crash.  They have new ideas, new visions and a new sense of who they are.  They are creating new markets and helping will kick the economy back into growth.  They are the manifesto brands.

Vice have a manifesto: to explore uncomfortable truths and go places they don’t belong.  They want to be the CNN and ESPN and MTV of the street for Millennials. Their product is immersive video journalism and their enemy is mainstream media complacency.

Brew Dog are the self-declared leaders of a consumer backlash against homogenisation.   They are taking on the monolithic corporate beer brands with beer that is never bland, never tasteless and always full of punk attitude.

blu e-cigarettes (a brothers and sisters client) stand opposed to the prejudice that equates their product with tobacco.  They are for the marginalised smoker who wants to escape the weed.  Their manifesto?   Freedom for the taking.

Metro Bank say “no more stupid bank rules”.  Hiut Denim are getting the town of Cardigan making jeans again.  Pizza Pilgrims are reinventing real Neapolitan pizza in defiance of atrocities like pepperoni stuffed crust.  Cafédirect (another client) champion coffee made the small way, by farmers in cooperatives around the coffee-growing world.

Manifesto brands offer real choice in the face of half a century of market rationalisation that reduced every sector to a few big brands.  Manifesto brands are about variety and diversity instead of uniformity.  They are idiosyncratic rather than lowest-common denominator blandness.  Often they have a sense of place yet far from being local brands, they have global ambitions and plans to change the world.  They represent new cultural groups with whom they share common enemies and a common purpose.  In all of this, they sound more like art movements than traditional businesses.  And that is no coincidence, for this has all happened before.

Time and again, a major event has provoked a new set of ideas that have created new markets.  Artistic vision and commercial ambition, inseparably entwined, have been creating growth since the very dawn of modernity.

The first consumer craze was sparked by a bunch of visionary geniuses called the romantic poets.  They stood against the bloody-minded rationality of the industrial revolution.  That was their event.  They created a new art movement around emotions, feeling and spirituality. They were also a commercially minded bunch who wanted their work to sell.  They wrote in simple language that normal people could understand and in doing so they invented popular fiction.

Within a few years romanticism swept the globe.  People bought the books, copied the look and lived the lifestyle.  Byron and co were the rock stars of their day and their fans were the first consumers.   The romantics stood for absolute inwardness.  They used drugs and alcohol to reach higher levels of consciousness. Their fans followed suit and before too long half the inmates of French lunatic asylums were absinthe addicts.

The surrealist manifesto was to liberate the imagination as an act of insurrection against society.  Emerging in Paris after the First World War, Surrealism influenced movies and luxury goods and interior design and gave us the kind of found object art still to be found as ornament in smart apartments everywhere.

One of the first big manifesto brands emerged in Europe in the 1940’s.  IKEA questioned why that kind of artistic spirit should be the preserve of a wealthy elite.  Their manifesto was for a better everyday life and they tapped directly into the aspirations of the post second world war consumer.

Around the same time came the beats and then rock and roll and youth culture, which was and still is a massive market.  The hippies came in the wake of the Cold War and the Kennedy’s and Vietnam; Punk emerged out of the economic collapse of the early seventies and the cultural collapse of the Sixties hippy dream.   Thatcher and Reagan begat rave and Generation X.  And so it continues with the post credit crunch Millennials.

What started with the Romantics is repeated time and again.  A big event triggers a re-evaluation and an explosion of new ideas.  At that moment, art and commerce are one.  After all, when you fell in love it was an all in, head over heels, change your life forever moment.

The Manifesto Project, a seditious, revolutionary pamphlet can be downloaded at www.themanifestoproject.co.uk

Phil Teer, Strategy Director of Brothers and Sisters, is talking The Manifesto Project at Cannes Lions International Festival of Creativity.