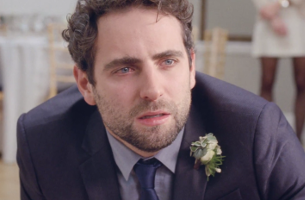 Today the British Heart Foundation (BHF) announces the launch of its latest integrated brand campaign that continues to reinforce the message of the sudden and unexpected devastation of heart disease: ‘Heart disease can kill when you least expect it.’ The campaign was created by MullenLowe London with media planning and buying by Omnicom Media Group’s PHD.

Heart disease can affect anyone at anytime, tearing families apart in an instant. The fact it strikes without warning is what makes it cruel – leaving loved ones with no time to prepare for it, no time to say and do the things they really wish they had. But there’s a way of fighting back. For over 50 years the BHF has pioneered life saving research to fight heart disease, believing that no one should have to suffer this devastation.

BHF’s clever and considered new campaign ‘Unexpected’ seeks to act the same way that heart disease behaves in real life, with content that disrupts routines, draws the viewer in with its unexpected nature.

The design is equally considered, with tailored, custom long form copy designed to draw attention with a relevant and irreverent message, bespoke to the media. In doing so the campaign also tackles the indiscriminate nature of heart disease by delivering what feels like a direct, one to one conversation with whoever is interacting with it, but at a national audience level.

Carolan Davidge, Director of Marketing and Engagement at the British Heart Foundation, said: “This campaign aims to shift the way people think about heart disease.  The truth is that heart disease can strike at any time, leaving loved ones devastated and unable to say goodbye.

“Around 3,000 lives are lost to heart and circulatory disease every week in the UK.  By making people contemplate the unexpected devastation that heart disease causes, we hope to inspire people to donate funds so the BHF can continue to fund life saving research.”

Richard Denney, Executive Creative Director MullenLowe explains: “Heart disease is cruel and its scale is often underestimated by the public. Our new work aims to make sure that every medium used in this multi channel campaign, engages and resonates with the viewer to deliver the British Heart Foundation’s message.”

The multi channel campaign brings together a broad spectrum of media to deliver the unexpected. At its centre is The Sun’s first ever bespoke editorial partnership, brokered by PHD and live during February. BHF has partnered with The Sun with a real time native content take over of the publications key editorial locations including the sports page and TV listings.

Rebecca Stafford, Business Director, PHD said "The Sun partnership brings our 'power of the unexpected' media strategy to life by using its most loved features in innovative new ways.  Supported by a media plan that sets out to interrupt daily routines across a number of other media, including coffee cups, taxi seats, cross track and radio, this campaign will make a powerful impact in everyday moments for people right across the UK."

BHF first introduced the power of the unexpected in the successful 2015 campaign ‘Heart disease is heartless’. The integrated campaign centred around the poignant and emotional film ‘Classroom’ – focused on a young boy, Ben, being surprised by his Dad at school.

To join the British Heart Foundation in the fight against heart disease, visit bhf.org.uk/jointhefight