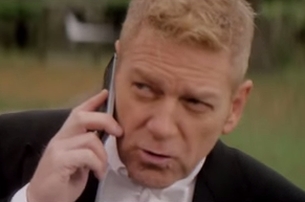 This is also the first time a British photographer has ever shot the entire Hollywood portfolio. Jason says: “I suggested to Vanity Fair a portfolio of British actors, and almost jokingly added that the British invasion of Hollywood was so established now you could make the whole portfolio British. So it was an amazing and surprising opportunity to have the magazine commission me to do just that."

MassiveMusic London were invited to do music supervision on the three films that accompany the Hollywood edition of the magazine, the first time film content has accompanied the edition. MassiveMusic London’s Creative Director Nico Steiger comments “When you think of a country you inherently think of its national anthem, so music is a powerful tool. It not only evokes a mood but can also take you back to a place or time in history.”

MassiveMusic Producer Tim Preston adds, “reinforcing the British theme through music really helped pull everything together and we looked for music that would support the project’s overall narrative. These are three powerful films which evoke a real British feeling but they’ve also got a fantastic tongue-in-cheek element to them so we were looking at them in that sense too. All three films are cohesive but they also posed differing routes musically, so we approached them as three mini projects, each specific in what they’re trying to say then ensured that they worked together too.”

In addition to the twenty-four iconic images, Jason has also directed three stylish short films featuring many of the actors in the portfolio. The films will be showcased exclusively on February 4th on VF.com.

Jason is one of the most celebrated photographers working today. His photographs regularly appear in both Vanity Fair and Vogue US and UK. He has photographed some of the world’s most famous names such as Angelina Jolie, Johnny Depp, David Beckham amongst many others.

In addition, Jason Bell is the photographer of choice for the Duke and Duchess of Cambridge having taken the official photographs for the christening of Prince George at Clarence House in 2013.

His credibility and recognition as a photographer is reinforced in the most recent collection of The Hollywood Portfolio, which will be shown exclusively in Vanity Fair, which hits newsstands on Feb 5th 2015.