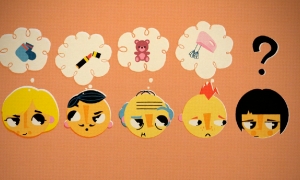 In the spirit of holiday giving, Seattle-based animation studio The Academy’s Swedish animators Brikk craft a clever 2:00  PSA, “Another Christmas Carol,” for Red Cross Sweden out of Le bureau, Sweden.  Using playful characters and visuals, the video urges people to gift a Red Cross Sweden donation instead of items commonly found on wish lists that begin as highly coveted and quickly become useless.  The organization will use the donations to provide food for those in need in war-torn Syria, filling stomachs and saving lives.

Says Brikk, “We together with Red Cross think that a food package to Syria is a better Christmas gift than a fitness band, and that’s what we are trying to communicate in the animation.”

The film and network TV quality animated images illustrate how 65 billion Swedish “bucks” were burned last year at Christmas on items often forgotten and eventually sold second hand.  It also highlights that most people don’t even remember what they gave or who gave them the gift they rarely use.  Their vibrant visual style and playful approach deliver a call to action that is both candid and memorable.