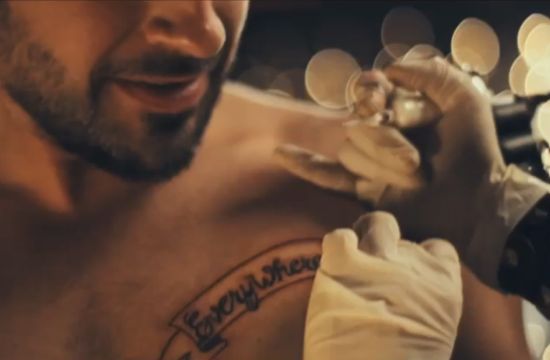 The backbone of the experience is a road movie which begins with a young man throwing in his job to embark on his dream journey using every imaginable kind of tyre from a motorbike to a stunt plane, a truck to a sports convertible. Along the way he gets involved in a mascot fight, picks up a femme fatale who end up stealing his car and has a tangle with the German police together with a giant toucan.

The soundtrack is a re-imagined version of the Johnny Cash’s rollicking “I’ve Been Everywhere” which follows the hero as he criss-crosses Europe.

Viewers can interact with the experience on a number of levels from gaming to competitions to getting tips for road trips to creating their own personalised content. Players can create their own video journeys or even tattoo a naked torso of their choice. High scores in the video game allow entry to win prizes to a major racing events.

Signing in with Facebook also allows the site to use the viewer’s profile to generate some interesting surprises. Over the year, new interactive elements and seasonal information will be added to the platform to keep it fresh and topical.

Already the site has had over 60,000 visits from more than 50 countries with people interacting for over 4 minutes on average. And those are only the 1 in 6 people who accept cookies.

Director Brian Williams of Bang TV notes “This was the ultimate dream for me as a director: a story and soundtrack to kill for, an amazing cast, a brand new platform and an agency that were the greatest collaborators imaginable. Does it get any better than making a real road movie?”

Jeremy McWilliams, Exec Producer of Bang TV, adds, “This production was a blast from beginning to end. We’d had just enough time to prep this joyful, slightly unhinged, dangerous environment where anything could happen. I think you can see it in every frame of the film.”

Ian Thomas, Executive Creative Director of JWT International says “This project was over a year in the making and it takes a brave client to embrace this entirely new way of delivering an audience. We love how the whole thing has turned out. There’s simply nothing like it out there.”

“This is the perfect junction of experiential marketing and brand-building advertising”, declares JWT International CEO Derek Turner-Smith. “It leverages Bridgestone’s brand equity of Your Journey, Our Passion in an unforgettable and irresistibly engaging way. It may well turn out to be a game changer.”