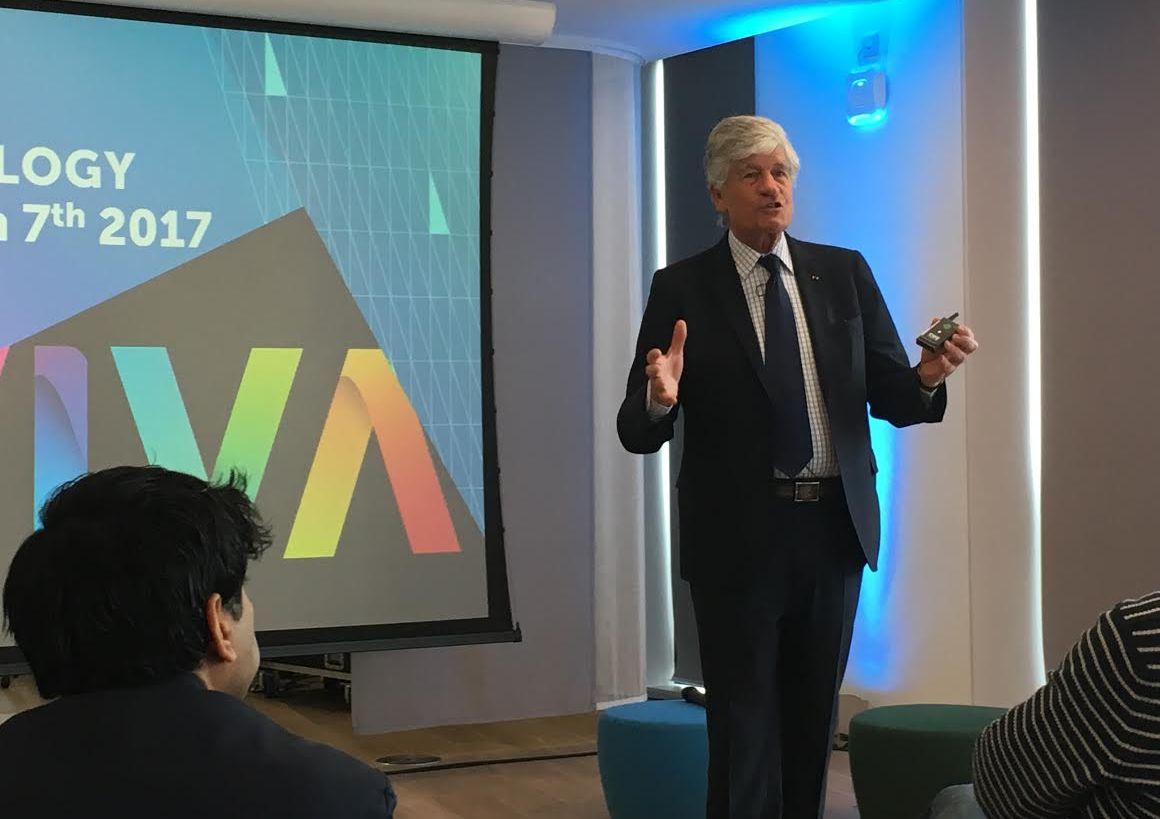 The outgoing CEO of Publicis Groupe, Maurice Lévy, was in London on Tuesday to promote the second outing of his giant French tech show, VivaTech. Despite being set to step down as CEO this year, Mr Lévy’s eyes were fixed on the future.

Talking to the audience of journalists, tech experts and senior executives from across the Publicis Groupe agencies, his message was one of optimism and dreaming big. VivaTech was launched last year and is touted as a blend of CES, SXSW Interactive and Cannes – but with a remit to engage the general public and to put exciting startups together with potential investors and mentors.

Last year’s show attracted a whopping 45,000 visitors over three days, and it’s clear that spending all of that time with dynamic upstarts has had a deep impact – even when it comes to the current political disruption and uncertainty, Mr Lévy was ultimately optimistic.

“The people have pushed for the Brexit; if they like it or not, geographically the United Kingdom is still in Europe, [though] maybe no longer, in two or three years’ time, part of the EU,” he said when asked by a member of the audience.

Although it had been noted earlier in the presentation, by Philippe Rotin of venture capital firm Accel, that Paris was now the company’s second biggest city in terms of startup investment, second to London, Mr Levy would not be drawn on any sense of competition between the two markets. Instead he offered hope, in the form of entrepreneurial spirit.

“I think that the collaboration and Europeanisation is much stronger than any fence and any barrier and any political gain. It’s too bad that the UK has decided to leave Europe. It’s too sad for the future because I believe that we need to get united and we need to be much stronger together,” he said. “And it’s probably due to the fact that the European Commission and some of the bodies have not been up to the task, and have been a little bit cumbersome and complicated. But I believe that, for entrepreneurs, there are no fences. Entrepreneurs don’t know what ‘barrier’ means. They can go everywhere, and they will find their way, Brexit or no Brexit.”

The full-on fearlessness of the modern entrepreneur was something that Mr Lévy had found particularly inspiring.

“There is a book to be written from what we are learning from others. My life has always been a learning experience. I have learned from everyone else: from clients, from colleagues, youngsters and obviously startups. Probably the most interesting aspect is that their dreams are big. The startups with small dreams barely succeed.”

“The fact that it’s a kind of limitless dream is extremely important because it opens perspective and it opens views. Even if they realise only 10% of the dream, it’s fantastic. But they dream big. They dream without borders, which is also an answer to your question [about Brexit].

Reflecting on his own past and that of Publicis founder Marcel Bleustein-Blanchet, he said that whilst entrepreneurs and business builders of the past also harboured ‘big’ dreams, they tended to go about realising these dreams in a more planned, ‘step-by-step’ manner. By contrast, startup entrepreneurs attack things all at once. “There are examples when you think about what happened with Google, with Facebook, with Twitter – even if Twitter is not exactly where it should be – if you look at where it is you see that dreaming big is important and these people have shown the path. Alibaba. Amazon. It’s impressive.”

And it seems that the no-holds-barred ambition has also informed his and the team’s approach to VivaTech. This year’s line-up of speakers includes the likes of Alphabet’s Eric Schmidt, Alibaba CEO Daniel Zhang and IBM Watson’s General Manager David Kenney. And it’s not just about matchmaking startups with big brands, or hosting panel events – Mr Levy also hopes the event will inspire the next generation of French digital pioneers. As well as working with universities, the event also includes a family day so that people of all ages can be inspired by innovative technology.

“For me the great success of a brand is when we have lost the ownership of a brand and it is owned by the consumer. That is the ultimate success, that P&G, L’Oreal, Unilever, don’t own the brand anymore, it cannot touch it, it belongs to the consumer. The day VivaTech is owned by the startups, by the ecosystem, that day’s success will be there forever, because it will be there, big, solid and vibrant.”