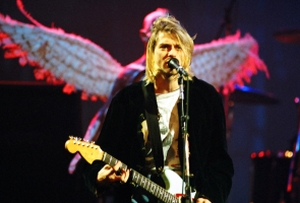 Montage of Heck, the first authorized feature documentary of legendary musician Kurt Cobain, will make its official premiere at the Sundance Film Festival in January 2015.

Directed by Academy Award-nominated filmmaker Brett Morgen, Montage of Heck is a visceral, no-holds-barred portrait examining the life and art of the Nirvana frontman.  The film was eight years in the making, and is the first documentary to be made with the cooperation of Kurt Cobain’s family.   Frances Bean Cobain, the daughter of Cobain and Courtney Love, is serving as executive producer.

Hailed as “the spokesman of a generation,” the life of Kurt Cobain remains a subject of fascination for music fans around the world. Sundance-goers will be the first to experience Brett Morgen’s ambitious portrait into the legacy left behind, before the film’s forthcoming release on HBO later in the year, with an international release to follow.

Buzz has been building about Montage of Heck, which is co-produced by HBO Documentary Films and Universal Pictures International Entertainment Content Group, since news of the project was announced on November 25.

Brett Morgan was granted unrestricted access to Kurt Cobain’s personal archives, including unreleased footage from Nirvana performances, previously unheard songs and never-before-seen home movies, recordings, artwork, photography, journals, demos and songbooks. Morgen tells Rolling Stone: "The trust that has been invested in me by Courtney [Love], Frances, and Kurt’s immediate family has been crucial in allowing me to paint an honest and empathetic portrait of Kurt that is unflinching and effecting. I look forward to sharing this film with audiences around the world in 2015.

Brett Morgen is the filmmaker behind such groundbreaking documentaries as the Academy Award-nominated On The Ropes (1999), the universally acclaimed The Kid Stays in the Picture (2002), and the HBO presentation Crossfire Hurricane (2012), which celebrated the 50th anniversary of The Rolling Stones. He is also is a prolific commercial director with over 150 spots for high-profile global brands including GE, Google, Nike, Dominos, ESPN, and HSBC.

Recently, Morgen helmed the new Exxon Mobil “Enabling” broadcast campaign for BBDO. With Morgen’s signature cinematic style, the spot shows how the simple task of boiling an egg is reverse-engineered into an epic journey to reveal the massive scale of effort to bring energy into our homes.