Brent Foster Wins Silver for New Director of the Year 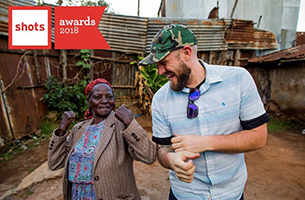 Holiday Films and Nimble Content director Brent Foster takes home a silver from the Shots Awards as New Director of the Year.

As the 6th documentary in his series 'While I'm Here, The Legacy Project' Brent and his small crew travelled to Kenya to tell the story of Beatrice Nyariara, a 75-year old woman who has lived in the Korogocho slum for 35 years.

Beatrice is teaching other local senior ladies how to defend themselves from sexual attacks which run rampant in the area.

Discover Brent's latest release from the series 'Enough - the Empowered Women Of Korogocho' below.

Sir John Hegarty on the Future of Talent: “Your Own Black Book Has Become A Very Limiting Way To Find The Right Person”
Thinking Of Buying An Oculus Quest 2? Here’s All You Need To Know
Jessica Alba and Zac Efron Take Action in Spy Thriller Trailer for Dubai Tourism
“Pyramids Are Tombs for Talent”