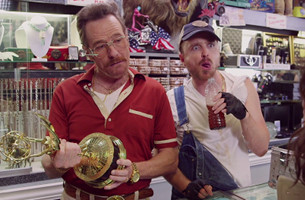 You’d think that with her four Emmys, Seinfeld star Julia Louis-Dreyfus could perhaps part with one of the gold sculptures. And that’s what almost happens in this hilarious ‘Barely Legal Pawn’ spoof for Emmy starring Breaking Bad stars Bryan Cranston and Aaron Paul.

Louis-Dreyfus awakes after a night on the rosé having agreed to purchase her own island - something that, despite currently starring in Veep, the actress cannot afford. She tries to make a deal with creepy pawnbrokers Cranston and Paul, who both dish up numerous nostalgic references to their much-missed meth-brewing characters.

And Breaking Bad fans, you’ll want to stick around 'til the end. We’ll let you find out why…