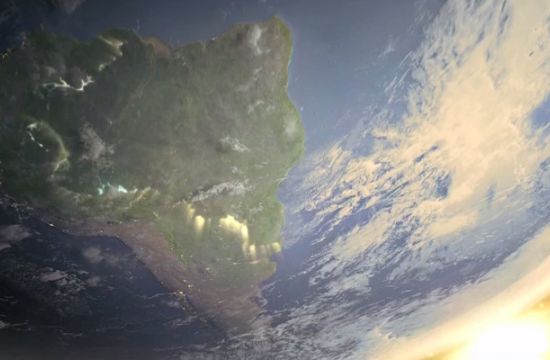 Itau, the official bank of the Brazilian National Soccer Team and the 2014 FIFA World Cup, will kick off its World Cup campaign with “The Great Transformation” film. The commercial transforms Brazil into a giant soccer stadium. The campaign shows the bank’s positioning of believing in the power Brazilians fans have to change the game and take advantage of playing the 2014 FIFA World Cup at their home country.

The Great Transformation from Africa Agency on Vimeo.

The superproduction traveled around the country for almost twenty shooting days, with locations at Brazil’s main borders, in a total of nine cities. The film, created by Agencia Africa, shows the structures of a huge stadium emerge in the country surroundings, transforming all of Brazil into a grand World Cup stadium with spotlights pointed at all Brazilians. With locations in Brazil's main tourist attractions, the commercial shows the structures of a huge soccer stadium emerge around the map, turning Brazil into a giant World Cup stadium.

"During the World Cup, we'll have Brazilian fans with energy capable of changing the game all around the country. Itau knows that only those that believe and take the position of millions of Brazilians can cheer, believing that everything will go well," says Andrea Pinotti Cordeiro, Institutional Marketing Director at Itau Unibanco. "This campaign is the milestone for our World Cup projects. The film represents the feeling that we believe and we want to share it with the whole country: the power of Brazilian fans, who will be Brazil's 12th national team player," said the executive.

"After filming for many days and numerous hours of computer editing, the clip shows our Brazil being transformed into a huge field, an immense stadium. Reminding us that this World Cup of all World Cups won't be played just in the beautiful stadiums that have been constructed, nor just by the 22 selected teams. But in each corner, street, and square in Brazil, and by all Brazilians," says Sergio Gordilho, Co-president and CCO of Africa.

The film will have 4 versions with montages from different scenes: one extended version of 1'45, one 60 second version and two 30 second versions. The campaign will run on TV, cinema and the internet.