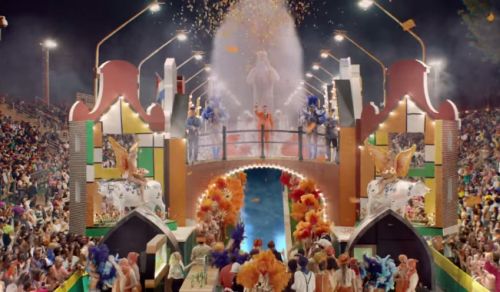 A sponsor of the Netherlands national football team and champion for all key moments of Dutch pride, Heineken have launched a unique campaign to boost and celebrate the country’s ‘Oranjekoorts’ (Orange Fever) in the lead up the 2014 FIFA World Cup.

Created with Wieden+Kennedy Amsterdam, the ‘Oranjekoorts’ 65-second TVC sees an extraordinary Dutch Float in a Brazilian Carnival bring proceedings to a halt before spreading Orange Fever to the hometown crowd. Lead by Heineken’s Chief Orange Officer - a legitimate job role filled earlier this year in the first wave of the campaign - the float sums up everything great about The Netherlands and the Dutch. The country’s world-famous illusionist Hans Klok magically appears, there's a Windmill and even Dennis Bergkamp makes an appearance. Everybody gets involved. All dancing to a samba rendition of No Limit, one of the world’s favorite 90’s anthems by Dutch group, 2 Unlimited.

Prior to the launch of the TVC, the campaign kicked off early this year with the hunt for Heineken's first permanent Chief Orange Officer (COO). A legitimate full-time role that sought a representative as Dutch as Heineken, but who shared the same international outlook and would be committed to spreading Orange Fever in The Netherlands and across the globe. The job was advertised on Heineken’s owned recruitment channels and throughout the Netherlands, with the lucky applicant ultimately to fulfill the yearlong role at Heineken’s Amsterdam HQ. After more than 2,500 participants reviewed the opportunity, Marco van Houwelingen was awarded the position. In addition to featuring in the campaign’s TVC, the COO attended the Winter Olympics and will attend the World Cup later this year.