Brand Insight: Why Bose and Grey Shut Down Central London 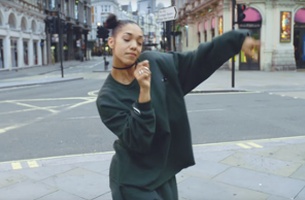 Usually when a film shows central London emptied of people it’s the sign of a zombie apocalypse, but a new Bose film has flipped the script and transformed the empty cityscape into a place of transcendent euphoria. The film, developed by Grey London and directed by Smuggler’s Jaron Albertin, sees dancer Maëva Berthelot bliss out to the TALA track ‘Alchemy’.

For the agency and production team, it was an ambitious plan – shutting down central London for minutes at a time is no small feat – but one that was worth it for the brand. The film transforms the tech benefits of the Bose products into a deeply resonant, emotional experience. LBB’s Addison Capper caught up with Bose’ Director of Global Marketing and Grey London ECD Dominic Goldman to find out more…

LBB> What was the brief that you first approached Grey with?

NE> We’re really passionate about the exceptional listening experience Bose products provide and the technology that enables it, so we asked Grey to develop a creative campaign that elevated this concept in a way that would resonate with consumers.

LBB> What are your main aims for the ‘Get Closer’ campaign?

NE> We want to show people how Bose products and technologies can get them closer to the music and entertainment they love.  We know that if we’re able to do this well with the Get Closer campaign more people will be interested in trying our products for themselves and become our customers and advocates.

LBB> What was your initial reaction when Grey pitched the idea to essentially shut down London?

NE> We knew that if the idea could be realised, it would be very special! It’s such a powerful way to show how the QC35 headphones and Bose noise cancellation technology can drown out the world around you and let you focus on your music or whatever you’re listening to – no matter where you are, even if it’s in the middle of one of the busiest cities in the world.

LBB> How does the choreography and Maëva Berthelot's wonderful dancing embody the Bose brand?

NE> She dances with grace and real emotion that perfectly embodies Bose QuietComfort headphones and everything they offer.  The film works so well because she’s clearly closer to her music with the QC35.

LBB> What sort of response are you seeing from the public?

NE> The campaign just launched last week, so it’s a little early to say – but initial response has been very positive.

LBB> What’s up next for Bose?

NE> We’re focused on rolling out this campaign – and communicating how Bose wireless headphones and speakers can help people better enjoy their music and content.

NE> We really love this film and hope others do too!

LBB> So you’ve emptied London - how?!

DG> We never quite believed we would actually be able to lock down central London in such heavily populated and high security areas. We used a helicopter for the aerial shots, which had understandably strict airspace rules. We held back traffic and people for a few minutes each take. This wasn't easy to produce. Most of this was captured in camera with minimal clean up in post.

LBB> What was the thinking behind emptying London for the film?

DG> The intention was to help people understand, or even feel, the benefit of Noise Cancelling. These headphones are really good. We sometimes wear them in our open plan office without any music playing and it really does feel like people and other distractions disappear.

With a saturated headphone market, it was important that the tone of this piece was calm, sophisticated and simple, much like their products. The work needed to reflect the environment that the product lives in and try to entertain people while clearly demonstrating the benefit. We wanted the viewer to be captivated by our dancer while marvelling with intrigue at the empty quiet streets of London. Why is she alone in places so famously busy like Piccadilly and Oxford Circus?

DG> We looked at other major cities too. They had to be globally recognisable locations, iconic places that people would immediately know as busy. That way they would question why everyone had disappeared. When factoring in all the permits and the practicalities of filming, London did both these things well.

LBB> Being empty, the spot could quite easily come across as quite eerie, but I don’t think it does - the dancer is totally at ease. How did you strike that balance?

DG> It was important that nothing had a sinister atmosphere. Therefore our hero's performance was key. The tonality of the music, coupled with her emotion, hopefully make it clear this is something curious and beautiful rather than dark.

LBB> There are so many iconic locations - which is your favourite shot and why?

DG> The shot on the Tube is my favourite. Not only because it’s so opposite to my commute in the morning but also the context of where it sits in the edit. The way it jumps out from the world above ground.

LBB> How closely did you work with dancer Maëva Berthelot and choreographer Simeon Qsyea?

DG> We worked with them very closely. We looked at hundreds of dancers from LA, London, Paris and New York - there's a lot of talent out there. However, Maëva gave us something very different. With the technical eye of Simeon (the choreographer) and the rest of the team focused on other factors like the tone she would bring to Bose, we felt she moved with a real emotion and a feeling of poetry.

Simeon was crucial in vetting the authenticity of the dancers. It made me laugh when he would point out some of them had clearly just learned a routine from YouTube. None of us would know.

LBB> Maëva is dancing to TALA’s ‘Alchemy’ - why that track?

DG> Firstly it had to be a track which would reflect the brand - sophisticated, cool and not too niche. It then had to be something Maëva wanted to dance to. It's the kind of track many people would like. It didn't seem to polarise. Personally, it reminded me of Banks. I like Banks.

DG> This wasn't easy to produce. Most of this was captured in camera with minimal clean up in post production. The hardest thing was holding back traffic and pedestrians for a few minutes each take, particularly with the 5am drunk Sunday crowds!

DG> This isn’t meant to feel like an ad. Our hope is it will be enjoyed as a small piece of entertainment.