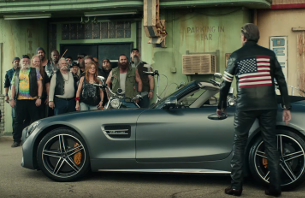 Advertising during the Super Bowl in 2017 is estimated to cost around $5 million for 30-seconds of airtime. As a brand, if you take the plunge you need to be in good hands - and which better than those of Academy Award-winners? Mercedes-Benz - back for its fourth year of Super Bowl advertising - and its agencies Antoni (Germany) and Merkley (New York) enlisted the Coen Brothers (The Big Lebowski, Fargo, No Country For Old Men, True Grit) to reignite the iconic 1969 movie ‘Easy Rider’, but with a twist.

The final production is a wry take on rider culture, and with the inimitable Coen Brothers aboard there are layers of visual flourishes and funny details that demand repeat viewing. The campaign is created for Mercedes-Benz’s AMG brand, its sector dedicated to high-end performance vehicles, and which celebrates its 50th anniversary this year.

LBB’s Addison Capper chatted with Mercedes-Benz USA’s Vice President of Marketing Drew Slaven, and Merkley CEO Alex Gellert, to find out more about the ambitions of this campaign for AMG and the experience of working with the Coen Brothers...

LBB> AMG is now 50 years old – what is the aim of the campaign for that specific section of Mercedes-Benz?

Drew> Very simply from a marketing angle, it’s a support point for AMG’s legitimacy. There are a lot of brands today that are running into this space, which I would call ‘high performance’. I think, much like what we’ve done in the world with autonomous driving, it’s to remind our audiences that this is not new to Mercedes Benz – we were originator in this space. As an originator, that brings us authenticity. Consumers know that it’s not just a company entering a space that people care about without knowing what they’re doing vs. AMG, which really invented this idea of taking a product and turning it from great quality, great safety and great style, and giving it the absolute pinnacle of driving performance. That’s what AMG is. The point of marking the 50 years is to remind people that we are not new to this.

LBB> There’s also an aim within this campaign to turn it AMG into more of its own brand – can you elaborate on that please?

Drew> Mercedes Benz as a brand is very well rounded. We do many things and we do them all very well. Some automotive brands are a little more singular in their attributes – Mercedes Benz has always been very broad in its attributes.

One of the attributes we felt that we needed to focus on in the last 10 years or so was performance. Consumers always put us top of class in safety, in innovation, in reliability, in quality. But we’ve always felt as marketers that we really wanted to lean into the performance side of Mercedes Benz. What that meant is that we would use AMG products – which are Mercedes Benz products, by the way –  as a proof-point for Mercedes Benz performance. We’re not at a point where we believe consumers know Mercedes Benz to be as well qualified as a performance vehicle as it is the other attributes we’re known for. That leads to an opportunity to differentiate or break off AMG as its own brand, in its own right, as a place that’s a bit more singular as a performance vehicle. That leads us into a new segment of pure performance cars.

LBB> This is the fourth year that Mercedes-Benz has advertised during the Super Bowl – you have been involved in 2011, 2013, 2015 and 2017. Why is it important for the brand to be involved this year?

Drew> We know that the Super Bowl is still the single most important marketing event that a company or brand can be involved in in the United States. So much focus is put on it, people tune into that programme to watch television commercials as much as the game. It reaches far more than any other broadcast events can. It will reach 110 million people in 30 seconds.

It’s also expensive. So we use Super Bowl when we feel that we have a story that is particularly important for us to tell on that larger stage. In the case of the 2017 Super Bowl, we believe that the story of the GT Roadster and AMG as its own brand warrants its own investment. Also, some of it is just down to time-to-product. Sometimes we have a great product to talk about, but the timing is off.

LBB> Alex, from a creative perspective, how did the collaboration work between the Antoni team in Germany and you guys at Merkley in New York?

Alex> It was a terrific collaboration and a genuinely joint effort. They [Antoni] had the original core idea for AMG and came to us for our understanding of the Super Bowl and the American market. We then worked with them and added some humour to it and changed some things that we felt would be a bit more appropriate for this market. The final campaign really is a truly collaborative effort from three parties: Merkley, Antoni and the Coen Brothers.

LBB> What inspired the link with Easy Rider? How early on did that idea come into conversations?

Alex> That was really part of the original Antoni idea. We then, along with The Coen Brothers, added parts to ensure that people understood the Easy Rider reference, changed some dialogue and humour.

LBB> While Easy Rider is a well-known film, there will be sections of the audience that might not immediately put the link together – how did you ensure that the spot is universally enjoyable / useful despite this?

Alex> I think there are two parts to that. We tried to put in as many symbols and references to the movie and Peter Fonda, so if you didn’t know what it was, you could look it up thanks to the references in the spot. But if you didn’t get them, one of our ultimate goals was to create an entertaining commercial that people enjoy watching and laugh at. We think the spot is entertaining enough to enjoy if you don’t get the reference and there’s enough information to look it up too. Saying that, it is the most iconic driving film and has broader appeal than just people who were around at that time.

Drew> Anytime we do anything in marketing, we look at the results and we learn from them. One thing that we’ve come away with from the Super Bowl is that you have to find the right balance between injecting your strategy and purpose for being there and creating the ultimate in entertainment. People tune in to Super Bowl commercials to be entertained. But as marketers it’s not simply our job to entertain, it’s our job to use our company’s funds wisely to ensure that with that entertainment, consumers walk away with the message.

That said, in the spectrum of entertainment, who better to entertain than Academy Award-winning directors? We felt that the Coen Brothers’ wit and eyes were a good fit for this commercial, and they have proved themselves to be excellent at creating dramatic entertainment.

Alex> They’re brilliant at bringing out character and infusing it with great personality. If you look at any of their films, they’re very character-driven in addition to their great storytelling skills. We wanted those characters to have a real personality. The Coen Brothers have that ability to really telegraph personality. Some directors need time to evolve characters and do it in a different way. They know how to telegraph, cast and get performances. Also, this is a character-driven spot played out by one of movies’ icons - they certainly know how to work with icons.

LBB> The Coen Brothers don’t direct a great deal of ads – how did you go about getting them involved and what was it about the script that made them come on board?

Alex> We had the thought that they’d be perfect. We had no idea whether they’d be interested, so we reached out to them. It was really just a phone call to their production company - I wish there was a more cumbersome story! Certainly, I think Peter Fonda, the reference to the movie, the comedic twist were all things that appealed to them. But there really wasn’t much back and forth - one they saw the idea, they were on board - which we were thrilled with obviously.

LBB> How were they to work with?

Alex> I wasn’t on set sadly, the executive creative director of Merkley, Andy Hirsch, went along with André [Kemper] from Antoni. Apparently, the Coen Brothers were absolutely delightful to work with. They understood what we were trying to achieve, they didn’t have big egos, they were collaborative. I heard no issues whatsoever and it was a very smooth, positive, process.

LBB> There are lots of brilliant little nuggets within the spot - the jukebox that only has Born To Be Wild on it, for example. How did they came about? Was it a case of letting the Coen Brothers do their thing? Was it collaborative? Or did you brief them quite strictly?

Alex> The answer is all three. There were some Easter eggs that came from the agency side and others that came from their side. You don’t hire world class directors and not let them add to the creative process! That’s what you want them to do.