Prostate Cancer UK on breaking down taboos around men’s health 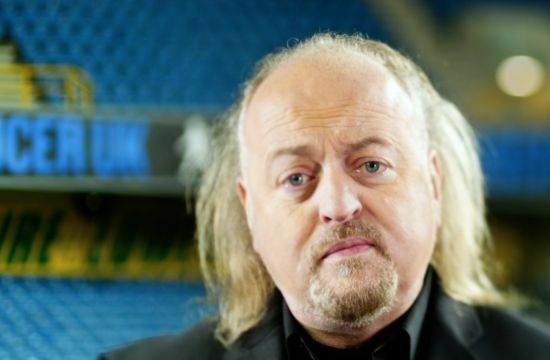 Since its launch in 1992, the pink ribbon breast cancer awareness symbol has led to worldwide participation in walks, races, cake bakes and, ultimately, a bump in breast cancer research. Yet while that surge in awareness was happening, activity around its male counterpart, prostate cancer, has waivered significantly. Aiming to break down the taboos that still dominate men’s health, Prostate Cancer UK has launched the ‘Men United’ movement. Complete with brand ambassadors, such as comedian Bill Bailey and actor Damian Lewis, and a new TV ad (which you can see at the bottom of the page) directed by Dunlop Goodrich co-founder Daryl Goodrich, the campaign aims to normalise conversations around the disease. LBB’s Laura Swinton spoke to Prostate Communications’ Director of Communications, Vivienne Francis, and Goodrich to get the full story.

LBB> What are the goals of this campaign?

VF> Men United v Prostate Cancer is our call for men to join together in a movement against the common enemy of prostate cancer. By 'signing up', men can then use their voice, time or money – whatever they choose – to say they are a part of a growing team that’s taking action on men’s health. The overall objective is to lead change. There is still a lot of injustice around this disease. So, as well as raising awareness, it is about having an 'army' of supporters who can campaign, spread the word, and raise funds, to help us redress the balance. We will not just leave it at sign up, we will have regular communication and events for people to engage with.

LBB> Is there a particular age range or demographic (other than 'male') that you're targeting with this campaign?

VF> Yes. We are really trying to reach men over 50, who are most at risk of developing the disease. We know the campaign will reach almost 100% of this group over the coming weeks, at least four times. Women are important too as an 'overheard audience', but this is about men taking control of their own health and the male health agenda.

VF> We worked with Bill last year on our first campaign and it achieved huge cut through. It made perfect sense to build upon this and work with Bill again. We know he resonates with the target audience in just the right way. The main criteria was to have someone that 'blokes' could relate to. Bill is much-loved and respected. He is also able to deliver a serious message, in a way that still has humour and is less threatening.

LBB> Men United uses the unifying power of football – why was sport chosen as a means to open conversations with men?

VF> Our overall strategy is about engagement, bringing men together, signing up to 'Men United', to fight the common enemy of apathy. As well as allowing us to take a cue from sporting language that men can relate to, it also reinforces the sense of team and unity and rallying that sport is all about. Although we are beginning with sport, we believe that Men United v Prostate Cancer is a broad enough concept to be adapted across other areas, such as comedy. 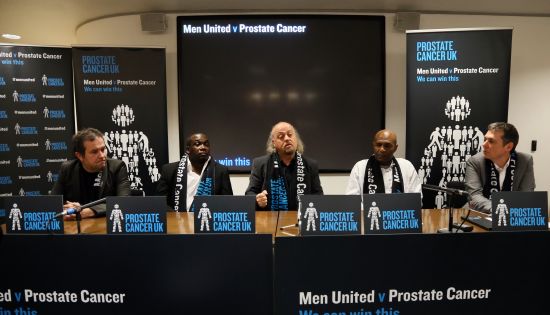 LBB> What was it about Daryl that meant he was the perfect fit for the campaign and what did he bring to film?

VF> Daryl filmed the ad for our previous campaign, 'The Sledgehammer Fund', which also featured Bill Bailey. So, he was the natural choice for this campaign and we knew we would be in good hands. He completely understands the balance between shocking people with the scale of this disease, using a touch of humour and settings that men can relate to and driving people to action. These are three tough objectives to crack in a 30-second ad, but Daryl is able to do that.

LBB> The spot has an emphasis on the colour blue – is that a deliberate effort to claim a hero colour for prostate cancer awareness the same way that breast cancer has with pink?

VF> Blue and black, the colours used most extensively, are part of our core brand colours, and they have been used to good effect. You could say we are claiming blue as a hero colour. I think the real hero is our 'man of men' identity. We are urging any 'new signings' to Men United to wear our pin badge. We want this to be synonymous with men's health the way the pink ribbon is to breast cancer.

LBB> The film says that you want to raise awareness and bring men together for prostate cancer in a similar way to the movement that has grown around breast cancer. What specific lessons have you learned from the breast cancer awareness movement? What do you think worked and what didn't?

VF> The main thing that stands out for me is the level of engagement and activism. It is no accident that treatments, investment in research and support for breast cancer are streets ahead. Women saw a need to make a change and galvanised themselves around the cause until they had made a difference. That is something to emulate. We see 'apathy' around prostate cancer as the common enemy here. The other thing we can learn from was how women broke down any embarrassment. I think, personally, that men are getting better at thinking about their health, but there are still some taboos to break down. It is hard to fault the breast cancer movement. One thing I am keen that we get right is that we are seen to be front and centre of the movement for men, with a clear voice and identity within it. I want Prostate Cancer UK to be the clear, leading force for men.

LBB> And do you think you have to approach men differently to women when it comes to talking about health?

VF> I do. We can aspire to the breast cancer movement, and learn from it, but men are ultimately different. Our brand was heavily influenced by men themselves, and 'Men United v Prostate Cancer' is too. We use their language. We also go where they are, and deliver the message in a way that is less threatening. For instance we are building big sports partnerships such as our three-year initiative with The Football League.

LBB> Part of the beauty of breast cancer awareness is that it’s flexible enough to partner with many different events and brands – have you got any partners/events lined up? How can people or companies get involved?

VF> We do have some events in the pipeline, which we will use to sustain the campaign, give people something fun to do, and enable people who have signed up to Men United to 'gather'. We have some great partners such as talkSPORT, who are really helping us to drive the message home. We are also having 'sign up' days. Other partners, such as Deloitte, are encouraging their staff to sign up in one day and to find out more. This is a campaign we will run in the long-term so our partners will really help increase longevity. We would also welcome new collaborations.

LBB> I love the design of the 'man' logo – it's both simple and complex and really sums up the idea of men coming together. Who did you work with to design it? What were the key criteria you had when creating it?

VF> Thank you. We love it too. We worked with design agency Hat-Trick, who did a fabulous job. We took a long hard look in the mirror as part of the brand review process and realised we were distanced, reserved and patriarchal. We knew we needed to be more bold, direct, masculine and present the cause with more urgency. We needed a much stronger voice and to literally 'man up'. The identity needed to be capable of conveying all of that, as well as the strategic need to bring men together, wherever they are, and whoever they are, to fight this disease.

LBB> This is, I assume, targeted at men in the UK, but have you been working with any international organisations and charities in other countries to spread or share Men United as a brand? Or have you any plans to?

VF> We have a fantastic partnership with Movember and work through them with other organisations globally on cracking this disease. At the moment, we have no plans to grow the brand globally, but you never know!

LBB> Why did you want to get involved in this project?

DG> As a man very close to 50 I obviously have an interest with prostate cancer. However small a contribution being asked to direct the commercial was, I was pleased to have been asked.

LBB> When it came to establishing the 'tone' of the film, what were you hoping to convey and how did you work with Bill Bailey to get it right?

DG> We wanted the commercial to grab the viewers’ attention immediately. By opening in a slightly sinister way with Bill's footsteps echoing down a dark empty tunnel the tone of something dangerous was set – before seeing Bill step out into the brightly lit stadium where a positive message was then conveyed. Bill is the ultimate professional. His deliveries were perfect and he hit his marks spot on every time. Both the crew and I were more than thankful for that as it was a bitterly cold night to be stood outdoors at a football stadium.

LBB> The light and dark in the film is really striking –  the use of shadows, the lights of the stadium – why did you opt for this kind of aesthetic?

DG> Given the importance of the message I felt it was crucial the visuals illustrated the 'life or death' scenarios that men face if we don't act positively and support the campaign. The images had to reflect the power of the script.

LBB> What were the key challenges you faced with the project?

DG> Aside from the cold, with only 30 seconds air time we had to be extremely selective on which of the key brand messaging we wanted to convey to illicit the greatest response.