Brand Insight: How KitKat’s 80-Year-Old Brand is Keeping Up with Modern Break Times 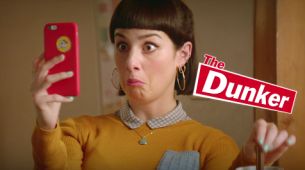 “Have a break. Have a KitKat.” As slogans go, the line for Nestle’s chocolatey, finger-y snack is one of advertising’s greatest hits.Conjured up in 1958 by JWT Orland’s Donald Gilles, it’s a line that’s woven into the collective consciousness of the UK and beyond. The brand itself is 80-years-old and was originally devised as a snack workers could pack in their lunchbox. Ever since, KitKat has been inextricably linked with the concept of break times.

But with such a hefty heritage behind it, how does KitKat stay relevant to modern consumers?

“It is definitely a balance for us,” ponders KitKat Brand Manager Ellie Worley. “Of course we’ve got a fantastic heritage of 80 years as a brand and that’s not something we’re ever going to walk away from, in terms of the strong link between KitKat and breaks. I think it’s really about adapting to how people are taking those breaks. But also, where consumers are more traditional in their styles, continuing to cater to them as well.”

With that in mind, the KitKat team has commissioned research into modern ‘break’ habits – and the results are due to have a significant impact on the brand’s marketing strategy.

Their survey found that 27 per cent of Britons feel that they don’t take enough breaks during their day and that 40 per cent attribute that to having too little time. In the course of their research, they also identified a growing trend towards ‘micro-breaks’; instead of taking a chunk of time to relax and disengage, people today tend to take shorter breaks and will multitask during them, checking their smartphones and checking social media. All of which is giving the brand lots to think about in terms of where and when to engage with consumers.

“In terms of the trends around how people are breaking now, it will influence our marketing in terms of the channels that we’re reaching out to them in,” says Ellie. “Social media is something that, as a brand, we’re really looking to work on with our global social media partners more extensively, and we’re really looking at our digital platforms as well. Another trend that we saw come through was the use of catch up TV and video on demand, and that’s something we’re looking at quite extensively with our online video as well.”

(It should be noted that in terms of technology, smartphone platforms and social media, KitKat already has something of a head start over its rivals though – in 2013 it hooked up with Android and lent its name to the operating system.)

The way people are taking their breaks may be changing (or, more accurately, diversifying – there are still plenty who prefer the more relaxed ‘traditional’ break style), what hasn’t changed is the idiosyncratic,ritualistic relationship consumers have with the KitKat. Whether you prefer to nibble away at the chocolate or dunk it in your coffee (pro tip: bite off the top and bottom and use it as a straw), confectionary fans have developed their own preferred methods of devouring the deceptively simple wafer biscuit.

That’s why last year, when KitKat launched their first ever global campaign, the brand decided to focus on the very personal and individual relationships people have with the biscuit.

This week, they’ve followed that up with a quirky newcampaign that zeroes in on some of the most prevalent eating styles. The new TV spot, ‘The Break Off’, is accompanied by limited edition KitKat variations,developed to leverage these habits. There’s a KitKat Chunky Extra Chocolate forthose who like to nibble and a vanilla-flavoured variation of the four-fingered bar developed by a sensory profiling expert for those who prefer to stir the fingers in their coffee.

For a marketer, these idiosyncratic rituals are a gift.“This is something people told us about. It’s not like we came up with the idea and went to consumers with it,” says Ellie. “It’s something that originally came out of some focus groups where consumers, completely off their own back, were talking about how they eat their KitKats. We just saw the passion with which they were talking about these rituals. And you’re right, it’s very personal to consumers. It really just takes that trigger of asking them for them to become really, really engaged and want to share these rituals.”

In fact, the marketing team at KitKat makes a particular effort to listen to feedback from the public, whether it’s from research they’ve carried out or even messages sent to consumer services.

“To be honest it really, really helps us when shaping our marketing plan. We have such rich insight and consumers love talking to usabout KitKat. They love getting in touch with us. We’re constantly looking at the contact we get through consumer services as well,” says Ellie, who notes that the depth of engagement from the public makes marketing the brand a unique prospect. “It’s very easy to be extremely passionate about a brand like KitKat because our consumers are so passionate. It’s a brand that’s part of their daily lives and people also have such nostalgic memories around KitKat. But also for us it’s about creating those associations and memories for consumers who, perhaps, don’t have that in their recent history and recruiting them to the brand. It is a fantastic brand to work on because of its breadth, scale and heritage but also that consumer passion which is also so prevalent.”

As much as these idiosyncrasies fuel creative and strategy,the marketing team is also very aware of the fact that they must balance these individual relationships with the fact that KitKat is a mass brand. That means catering to both the new wave of ‘micro-breakers’ and the traditional breakers.Fortunately, according to KitKat’s insights, the various products in the line appeal to different kinds of people, allowing them a degree of flexibility.

Despite the nostalgia and rituals among vast swathes of the public, one challenge for the KitKat marketing team is the need to share and nurture that emotional connection with those who may not have the same history with the brand, for example younger people and new markets. But they’re rising to the challenge, says Ellie.

“I think it is a challenge that faces all brands with such a strong heritage. We’ve actually seen in the last year, with the launch of our Celebrate the Breakers campaign, a really strong boost to our 16-44 audience,which was exactly the ambition of that campaign. It’s really about continuing on that journey and showing that consumers how relevant KitKat is today as it was 80 years ago.”

These global campaigns have been run out of the UK and were devised by KitKat’s creative agency J. Walter Thompson (the same group that came up with that iconic strapline all those years ago). However, the global campaigns do not mean that the marketing team have abandoned local executions and creative. Ellie says that ‘moment marketing’ is integral to their strategy as it makes the most of the brand’s humour and tone of voice – which necessitates a local perspective.

In the past couple of months, J. Walter Thompson London has exemplified this with their cheeky outdoor campaigns that coincided with the release of the James Bond S.P.E.C.T.R.E film and Black Friday. At Christmas,they released radio and TV ads that offered consumers a bit of respite from the stress by wilfully deviating from the ostentatious showiness of the festive advertising blitz.

Meanwhile, in Japan, for example, J. Walter Thompson teamed up with a boyband to create a singing hologram for frazzled students. It was inspired by the fact that the word KitKat sounds similar to the good luck phrase ‘kitto katsu’ and, consequently, the snack is a popular gift for students studying the university entrance exam.

For now, KitKat is pushing forward with the new phase of their global campaign – and according to Ellie there’s more to look forward to.

“2016 for us is about building on what was a really strong year for the brand in 2015. We launched a global campaign, the first time KitKat’s ever done a global campaign, which was ‘Celebrate the Breakers’. In quarter one with this Break Off campaign it’s really about taking it one step further and focusing on the rituals consumers have with KitKat,” she says. “In 2016 we’ll be helping to engage a bit more at that ‘break’ moment and helping consumers make the most of their breaks. We will have a really big event in quarter two that will allow consumers to do that in a very innovative way.”

So keep your eyes open for more from the brand in coming months. But in the meantime, have a break and… well… you know the rest!