Brand Insight: How Glenfiddich is Re-Tooling for the Luxury Market 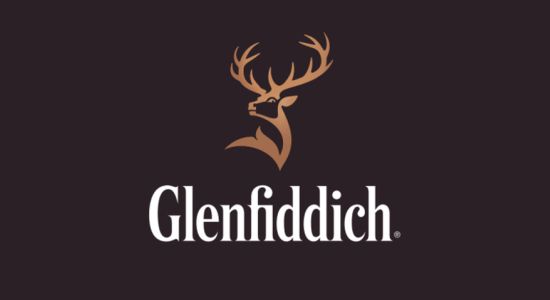 Something interesting is brewing (or perhaps, distilling) in the whisky sector. Over the past few years the water of life has become the tipple of choice among the world’s trendsetters and sophisticates. From cash-rich stockbrokers to Brooklyn hipsters (whisky and pickle juice has officially been a ‘thing’ in Williamsburg for quite a while now), the world is thirsting for single malt and global demand for scotch has doubled over the past decade. It’s great news for the sector but means that stocks of aged malts is drying up and these days it’s become a somewhat more exclusive, luxury commodity.

That’s why Glenfiddich and their long term design partners at Purple Creative have decided to revamp the family-run whisky brand with a more up-to-date and upscale visual identity, which they’ve just revealed this week.

The new look is a 360 degree make-over that covers everything from logo and colour palette to 3D spaces, packaging and even typeface. The goal is to create a cohesive brand experience that can be implemented across markets which have previously been visually fragmented and, of course, to capitalise on the ascendancy of whisky in the luxury sector.

"[We wanted] to premiumise Glenfiddich, embedding it into the world of luxury; to ensure a strong global consistency at all consumer touch-points; and to harness the strength of the brand equities of ‘pioneering spirit’ and ‘family run’ to make the brand truly distinctive,” explains Sarah Macaulay, Global Marketing Manager.

“If somebody’s buying a bottle of whisky at £100 plus, then it needs a visual identity and a brand world around it that fits with that price. So premiumisation was one of our key objectives,” explains Gary Westlake, Purple Creative’s co-founder and creative director.

The most striking element of the comprehensive re-fresh is a refined and simplified redesign of the brand’s iconic stag logo. Based on the Sir Edwin Lanseer’s famous Victorian painting, Monarch of the Glen, the logo carries plenty of heritage. The Purple team were keen to build on that history – they’ve restored the stag’s 12-pronged antlers from the original painting – whilst creating something striking and strong enough to exist independently of the Glenfiddich logo-type. The logo had been updated in 2007, but with the shift in the brand's ambitions the team felt it appropriate to make their noble beast more solid, dynamic and sophisticated. “We identified that our stag icon had the most visual equity,” notes Gary. “People recognise Glenfiddich for the stag – in parts of Asia it’s referred to as the ‘whisky with the horns’. I think a lot of that highlights the power of an icon. Let’s not reinvent the wheel but let’s re-evaluate. We’ve made it stronger and elevated it.”

The stag, along with other newly created symbols, also crops up in unexpected places. Inspired by top-end fashion brands like Burberry and Louis Vuitton, Purple has also created a series of tiled patterns to be used on packaging and in other environments.

Another central facet of the refresh has been the installation of a contemporary colour palette to span packaging, advertising, print, digital and 3D executions. “Over the years Glenfiddich has been pulled in different directions, and maybe that’s because every variant of Glenfiddich in the folio has a different palete which helps the consumer navigate the range. But that colour was promoted and allowed to be used in a much bigger way at point of purchase. What that ended up doing was creating a multi-coloured brand. We thought it was important to have a mother brand colour and not allow it to stray,” explains Gary.

With that in mind the team settled on ‘New Make White’ (representing the purity of the distilling process), ‘Fiddich Stone’ (pulling in the granite texture from the Glenfiddich distillery building) and the show-stopping centre piece ‘Pagoda Copper’. “We decided to refer to our backstory here. Obviously a lot of whisky brands use copper stills but we are family run and have an on-sight coppersmith which is very unique in the whisky industry. We look after our copper day-to-day.”

Using copper over the more traditional gold when you’re aiming for premium price points and high-spending consumers is a bold move. However it’s also one that shows an understanding of the evolving tastes of the luxury market in all corners of the world. “There’s a whole shift from what people used to perceive luxury as to what they think now. It used to be about show, the gloss and the bling. People think that Asia and Russia and markets like that perceive luxury in that way but what we’re finding is that there is a shift. It is more about the craft and the provenance and the story and I think we’ve captured that.”

The idea of provenance and heritage is at the core of Purple’s approach to their work on Glenfiddich. They’ve worked with the brand’s parent company William S. Grant & Sons for a decade and in that time they’ve been privy to the family-run business’ archives, giving them deep insight into the people who built the company, their personality, their values. That’s allowed the Purple team to go beyond visual identity to help craft a lexical one too. The brand refresh comes with a carefully mapped-out tone of voice and language bank – and also two new typefaces. 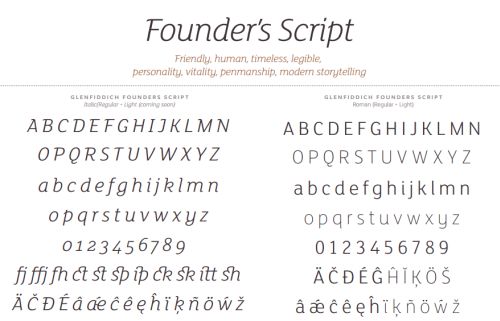 The first, Glenfiddich Modern, is a ‘headline font’, inspired by the brand’s logotype. The second – one which creative director Gary enthuses over with the geeky enthusiasm of a true designer – is a contemporary font inspired by the writings of William S. Grant himself. His letters and ledgers were submitted to two independent graphologists who identified idiosyncratic flicks and flourishes which could be translated into a modern typeface. “This font is used in the storytelling aspects of the brand. It feels warmer, more human and it’s got that personality,” says Gary.

In all of this, the trick has been to balance the expectations of the traditional, older whisky drinker who is used to darker, 'heather-and-weather' type imagery and the tastes of high-end drinkers. The solution has been a warm and authentic package that evokes the textures of Scotland and the whisky's heritage but in a contemporary, clean fashion.

The team have been very keen to think beyond packaging and advertising and the next step in the brand’s makeover is to firm up the ambient, 3D assets. Gary mentions Veuve Cliquot as a benchmark for a high end drinks brand that has a consistency of colour, materials and atmosphere across its events, shops and experiential spaces. Currently Purple are collaborating very closely with agencies around the world that work on Glenfiddich’s shops and spaces to establish an approach.

The new look was revealed internally three months ago and aesthetic looks set to filter into the brand, across territories in 2015 in time for a hard launch next year. As for Purple, the wholesale brand overhaul is the culmination of one long and heartfelt journey, cementing the relationship between Glenfiddich and Purple with a nice wee dram.

Purple have become an extension of the Glenfiddich team over the years, they are creatively obsessive about attention to detail, and genuinely invested in the future of our brand. This means that their creative responses align with our objectives. We’re incredibly proud of Glenfiddich’s new visual identity, and we’re confident that it will enhance the brand’s luxury credentials globally,” says Sarah of the long-running collaboration.

And for Gary it's a sentiment that runs both ways. “It’s one of those things that’s been really interesting for us – is tapping into all that knowledge we’ve built up. It’s been a real privilege to be able to execute that.”