Brand Insight: How Ballantine’s Took Whisky to Infinity and Beyond

Ballantine’s and Havas Work Club on the Space Glass, TShirtOS and lobbying for a whisky emoji 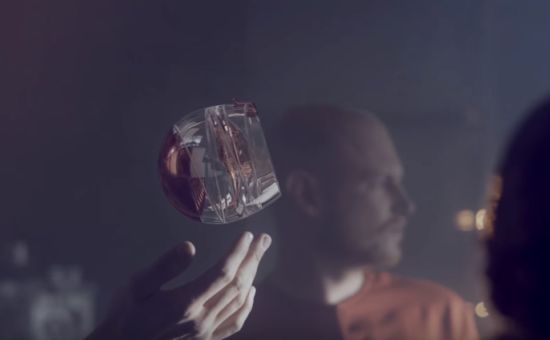 The whisky sector is a pleasingly paradoxical place. It’s a product steeped in tradition and in which age and quality seemingly correlate. It’s a product that’s becoming increasingly popular with younger drinkers and an industry that’s been gradually swapping its fusty old image for something a bit more contemporary… a bit cooler.

Some whisky brands have embraced Mad Men chic, all sharp suits and clean, retro lines (see Jude Law’s smooth turn for Johnnie Walker). Others have gone the other direction and fallen in with the beardy woodsman mob in an attempt to bridge the gap between brand heritage and the hairy-hipster lifestyle (Dewars). And others still have gone for sexy celeb hook-ups (the House of Haig and David Beckham, for example). But Ballantine’s is the only whisky brand that’s jumped feet first into the future, thanks to its relationship with digital agency Havas Work Club.

Ballantine’s and Havas Work Club have been collaborating for five years now, and that relationship has resulted in projects that have pushed the boundaries of technology and innovation. In September they revealed the ‘Space Glass’, a whisky glass that could allow space travellers a classy drinking experience in zero gravity.

The glass – a vision in 3D printed rose gold – was designed with the Open Space Agency, a group of ‘astropreneurs’ and was tested in microgravity, in the ZARM Drop Tower in Germany. It was designed as a ‘glass for the future’ – and it’s a future that is very real in the public’s imagination thanks to the likes of the controversial Mars One project and Virgin Galactic’s attempts to get commercial space flights off the ground.

“Open Space Agency is a small group of ‘astropreneurs‘ committed to designing products for the future. They shared our passion for the project and our vision for a shared future in space. For Ballantine’s, it was an opportunity to support a start up community making a genuine contribution to the space program,” explains Work Club account director Ben Tolfree.

What’s more, he says, the design reflects a desire to bring together engineering and experience. “The ambition was to design for connoisseurship and preserve the whisky experience we enjoy here on earth. From the shape and weight of the glass to the cold touch of the rose gold mouthpiece, the design was developed in collaboration with Ballantine’s Master Blender, Sandy Hyslop, to ensure that it was true to the whisky connoisseur as well as being a piece of space engineering. Rose gold is also an extremely unreactive material that doesn’t affect the flavour of the whisky itself.”

Upon its launch, the glass was featured in tech and lifestyle websites and magazines, like Wired and Gizmodo. And it’s not the first time that Ballantine’s and Havas Work Club have penetrated the popular imagination. In 2012, they pre-empted the tidal wave of wearable tech with TShirtOS, the world’s first programmable t-shirt. Again, the project was toasted by journalists and led to demands and inquiries from members of the public.

According to Ballantine’s marketing manager of digital, Rohan Nayee, these projects are the result of a very deliberate ambition to stay one step ahead. “We look to penetrate popular culture, but with our view, our twist, our reason for joining the discussion.  We often reference this as ‘zeitgeist’, and it’s a term I like… It keeps us fresh, keeps us evolving, but it is a very challenging space to play in by its nature. You have to be one of the first and freshest to the table – something we believe we achieved in both the aforementioned projects.”

But while both Space Glass and TShirtOS are undeniably fun, they’re very much grounded in real business challenges. These aren’t indulgent innovations and they’re never pursued just for the sake of it.

“Ballantine’s are seeking to build brand equity and consideration in an increasingly crowded market. While the whisky category is expanding, high growth in American Bourbon and even Japanese whiskies are putting increasing pressure on Ballantine’s to maintain share through a positioning that resonates with consumers,” says Ben Tolfree.

The sector is undergoing radical changes. The ‘typical’ whisky drinker is no longer ‘male, pale and stale’. While women accounted for only 15 per cent of US whisky drinkers in the ‘90s, that share has grown to 37 per cent. A survey carried out by World Whisky Day in 2014 found that 60 per cent of 18 to 24-year-olds would describe themselves as whisky drinkers. Growing demand has created shortages of single malts, creating a vacuum for blended whiskies to exploit, resulting in a ‘premiumisation’ of blended brands. On the flip side, Scotch whiskies in particular are also having to innovate to fight off challengers from other countries, in particular Japan.

“It’s a dynamic sector, which makes working in it very exciting,” explains Ballantine’s Rohan Nayee. “Globally it is a growing category with new drinkers of both genders joining. New consumers are demanding more and something different for their money and that can lead to premiumisation, as you mention. An experience and a belief in something from a brand is now key in terms of differentiation in a fierce competitive market place. The craft and skill that goes into making a blended whisky lends itself to the artisanal and more premium experience, so it is a natural fit, but just one of many trends that are currently shifting the landscape for all whisk(e)y brands, none more so of course, than the proliferation of flavoured whisky.”

When they’re not dreaming of zero gravity tipples and interactive clothing, Ballantine’s are also working hard to reach their evolving consumer base in other ways. With another one of their agency partners, M&C Saatchi Sports and Entertainment, they’ve worked on some surprising brand pieces, including a stop motion animated gif which was filmed using a satellite  and a hyper-real underwater shoot with photographer Benjamin Von Wong.

“As the category expands, the demographic of a ‘typical consumer’ is certainly shifting. Our Insta-zine, for example, was written for our Instagram community, a younger skew of the traditional demographic, many of whom are finding their tastes maturing and trying whisky for the first time,” explains Rohan. “The Insta-zine challenged stereotypes associated with whisky by looking at the most influential women shaping whisky, computer game culture influencing mixology and introducing new whisky drinkers to bitter cocktails for the first time.” 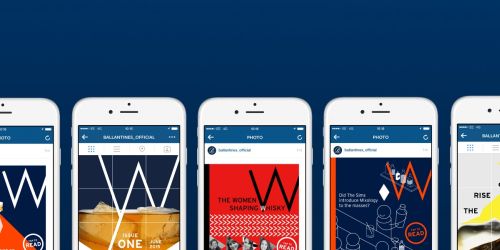 As the insta-zine proves, sector disruption can take many shapes and sizes – when Havas and Ballantine’s aren’t ‘boldly going’ into outer space, they’re lobbying for whisky emojis.

“Not every disruptive idea has to be as big as a Space Glass,” says Ben. “This year we've lobbied the governing body of emoji via social media to create a whisky emoji, which is expected to be universally adopted in 2016. In July we launched W, the first Instagram magazine for modern whisky drinkers. W had the CMO of Airbnb asking Instagram how they could be as cool as Ballantine’s. These projects, big or small, are the result of constant exploration and experimentation of digital culture driven by a mission to champion self-expression.”

As seemingly disparate as these various projects are, all of Ballantine’s creative output revolves the central value of self-expression, explains Rohan. “Ballantine’s is a brand that stands for self-expression – a belief that you should stay true to who you are and celebrate it. It is in our DNA to want to do things differently. The work we have done together champions self-expression in ways that are distinct and disruptive and stand out from the crowd in a way only Ballantine’s can do.”

These brand values form core criterion for deciding whether or not to move forward on a particular project, continues Rohan. “First and foremost, it has to make sense for the brand.  That is core to the brief and absolutely core to the output. We do not believe in innovation for innovation’s sake, but if we can capture people’s imaginations through a new way of looking at our world that is intrinsically linked to our brand or brand message, then I hope we continue to do so; no matter how challenging it is.”

Another core factor is trust. In order to execute such audacious projects, the marketing team at Ballantine’s have to maintain a close, trusting and respectful relationship with their partner agencies. “I mentioned the word ‘trust’ and I think that is key to the content that we produce,” says Rohan. “We certainly see all our agency partners as exactly that – partners, not providers – and we work with them in exactly that way. We are all equally invested in our projects and in that sense I would say we are a very hands on Brand Team. As a team, we speak to our agencies on most days, and see them at least on a weekly basis. That doesn’t mean these types of projects come easily. They are incredibly hard work (on both sides) but perhaps the strong relationships we foster enable us to come out the other side with the right results and still able to share a drink at the end of the day.”