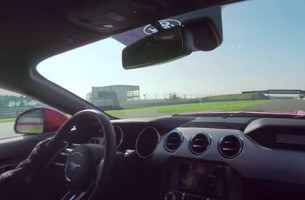 Car brands have always been a unique proposition when it comes to comms and marketing. There’s a huge ready-made audience, hungry for information, in the shape of enthusiasts and petrol heads – and even non-experts can find themselves delving pretty deeply, investigating everything they can get their hands on before choosing which motor they want to drop a few grand on.

What that means, for automotive brands like Ford, is that pushing the boundaries with online experiences, creative technology and new ways of telling their story isn’t just a fluffy nice-to-do – it’s pretty much expected by consumers. The willing and pre-engaged audience also means that the earned media space is particularly vibrant. For Mark Truby, VP of Communications and Public Affairs at Ford of Europe, experimenting with new platforms and finding new ways to reward and stimulate both fans and casual consumers is a huge part of his job.

“People expect you to make it easy for them, to make it really fun for them. From a communications stand point that’s been a really fun journey for us,” he explains. Keeping apace with the acceleration of new platforms and technologies is imperative, which means each new project involves a degree of uncertainty and learning. It also means that the diversity of content his team puts out is quite something. Recent projects include a 360-degree YouTube video for the launch of the Ford Mustang in Europe that put viewers in the driving seat in a car racing around the famous Silverstone track, a Google Street View experience for the Frankfurt Motor Show and an eight part documentary following a team of developers as they design and bring to life a new model.

What’s more, the team have to think about both the emotional brand experience (the thrills and spills of the Mustang zipping round a race course certainly qualifies for that, as viewers can choose to experience a driver’s eye view or to zoom out to a hood-mounted Go Pro camera or even a drone view) as well as the more functional, detailed communication.

“The thought was, ‘how can we give people an experience of the Mustang that feels a little bit more immersive than just a video?’ Obviously video is very, very important too but this felt a bit more personal, almost like a video game but real life. With today’s technology it’s really doable. It’s not expensive, it just takes a little extra time to do it right,” says Mark of the Mustang experience.

The team are constantly on the look out for new technologies and platforms, meet regularly with both tech giants like Facebook and Google as well as their PR agencies and WPP Ford group agencies to scope out new opportunities. Mark says that Whatsapp and Facebook’s recently announced 360 video platform have been generating a lot of interest among his team.

“Storytelling is storytelling. It still has to be compelling, and the format in and of itself does not make it interesting. But that being said, a lot of times with these new digital storytelling devices you can do things you could never do before if you have the right stories to tell,” he says.

Creativity, he says, is more important than ever – particularly for the automotive industry which, he reckons, has been a bit slacker compared with other sectors’ marketing and comms efforts.

“Traditionally we [the auto industry] weren’t as inventive on our communications as we could have been, maybe 10 or 20 years ago. Companies that sell the same soda year after year and make it seem different, they’ve really had an incentive to be super creative whereas we have the benefit of having a product that has a natural appeal to a lot of people and which is somewhat well followed,” he explains. “I do take inspiration when I see companies in the consumer product sector that really come up with great ideas to make you rethink their brand– they have to because they’re selling the same stuff every year. We have the advantage of having new models every year and a lot of interest in what we do. For me the challenge is: let’s be every bit as creative as any consumer product and reinvent the way people think about Ford.”

In fact, says Mark, a brand like Ford, which has a huge number of fans, has a duty to be inventive, interesting and authentic. “When people follow you and they invest their time in you, you reward them by doing interesting creative stuff. I think it says about who you are, how much care you take with your brand, about how creative your team is, the passion you have as a company. I think, particularly these days, people really reward companies that are innovative like that,” he says. “People don’t just want to know what you do, they want to know why you do it, so we try really hard to make that clear, to show our passion for building great cars, for providing mobility, helping people move round the world.”

That ‘why’ requires openness and transparency – something that is epitomised in their ambitious new documentary series. A year in the making, the series, which will be released episode at a time over eight weeks, was created with the aim to make something that would not look out of place on TV and something which would provide some genuine insight.

“We really took pains not to just tell the triumphs but to also show the setbacks, the frustrations. I think that’s what viewers expect. They don’t want to see something that’s overly corporate and they don’t want to see something that doesn’t represent the truth of the situation. Our goal was to be very journalistic in this – that took a bit of convincing from our team to the executives to say ‘it’s ok to show you had a bad day or a setback or you couldn’t get the car to pass this test one day’. We wanted to be very journalistic and real and to use the Internet to tell this story. It will be interesting to see what happens and whether people gravitate towards it.”

And while the openness might have been a tricky sell internally, it seems to have gone down well with fans. The trailer was picked up by car blogs and generated 200,000 views without any paid promotion of the video.

The discussion around openness and authenticity is an interesting one for a car brand to be having, particularly in the current context of the VW emissions scandal. While Mark won’t be drawn on the specifics of the case and is reluctant to comment on the plight of his competitor, he does acknowledge that the industry as a whole has to brace itself from reflected negativity.

“When something this big happens it certainly does impact the way people think about a given industry. Think about the banking industry and some of the issues they’ve had,” he says.

However, it’s also an incentive for other brands like Ford to re-affirm their own values and double down on their own communication efforts to clarify their stand point and differentiate themselves. “We do have to be assertive in communicating our story and make sure people don’t make assumptions about us when there’s this much news swirling around about one of our competitors. We try not to get too involved in talking about the competition, we want to tell our story,” he says. “In a situation like this we may even do a bit more communicating just to make it absolutely clear for everyone involved where Ford stands on an issue, and what Ford stands for as a company. I think that’s what’s important. People want to know what you stand for. They want to know your values as a company. I think this is a good time to reinforce our values and really not spend too much time talking about the competition. That’s really not for us to do – it’s for them to sort out their issues.”

What’s clear from talking to Mark, a former journalist who worked in Ford’s birthplace of Detroit, is that the brand has plenty of new stories to tell – and lots of new ways to tell some of the brand’s old stories too. After all, Ford occupies a pretty unique place in the automotive brand landscape thanks to its heritage and can trace its values back to Henry Ford’s desire to help people to solve humanity’s fundamental need for mobility and to make life better for his employees and for society at large.

And judging by these recent projects, 21st century Ford is also embracing its founder’s insatiable curiosity, inventiveness and creative spirit.