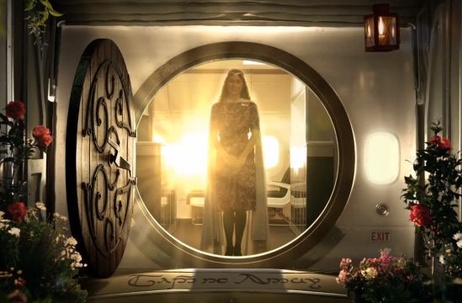 It’s time to brush up on your Elvish and practise your smoke rings because The Hobbit: An Unexpected Journey (as you probably already know unless you’ve been hiding in a cave in Mordor)  is due to hit cinemas at the end of November. Last week Air New Zealand revealed a magical inflight safety video and LBB’s Laura Swinton caught up with Jodi Williams, Head of International Marketing at the airline to find out about their partnership with Weta and Warner Brothers – and to discover what Tolkien-esque treats lie in store for travellers.


LBB> How did the partnership with the Hobbit come about?
JW> Air New Zealand partnered with New Line two and a half years ago at the time of the Lord of the Rings franchise. It’s an obvious link for us, promoting the country as a destination and working with such great creative talent as Sir Peter Jackson and his team at Weta workshop and Weta Digital. We know the movie made a significant impact for New Zealand as a destination. In some instances it put us on the map, and in others it gave those consumers who already had New Zealand on the bucket list a reason to travel.
With ‘The Hobbit’, it was an easy decision for us to decide to be a part of it. In this instance Warner Brothers has the global rights and is involved. We wanted to keep raising the bar. It’s really important for us, when talking about these relationships, to bring something that is unique to the table. We wanted to showcase the New Zealand personality. It wasn’t just about pushing the movie; it was about us as a small brand in a global market to get that cut through and communicate who we are. We don’t do big brand campaigns and we don’t have a significant marketing spend in our international markets. It was really important that when we made the decision, we were thinking about the types of activity we were going to do that were very different. I think that’s what attracted Warner Brothers to us as well. With massive movies like ‘The Hobbit’ and ‘Harry Potter’, there’s a significant investment in promotion through TV and outdoor. It’s a big spend. We can come on board and do something that they wouldn’t normally do – like a safety video. We’ve become a bit known for our quirky safety videos and it seemed a good fit to make one on ‘The Hobbit’.
LBB> With the in-flight safety video, who did you work with for the creative and production?
JW> We decided to engage Weta to work around the script and the creative direction because they’re such a talented pool of individuals and they know the movie property inside out. We just loved the idea of being able to partner with another New Zealand company as well. We worked with Ben Hawker from Weta, who developed the script. It was directed by New Zealand director and artist Dick Frizzell, who we’ve worked with before – his production company produced it too.
It was a three day shoot in Auckland, which was a fantastic process. We had a number of cameo appearances; we were very lucky to have Sir Peter Jackson involved and Weta Digital worked with us on Gollum. Royd Tolkien, the great grandson of JRR Tolkien, and Mike, his grandson feature in the video. Royd is the Hobbit hairy feet. Dean O’Gorman, a New Zealand actor who plays Fili the Dwarf also has a cameo, as do some of the hobbit extras from the film.
LBB> There’s a lovely sense of humour about the film that seems to typify the creative work that comes out of New Zealand – is that humour an important part of the Air New Zealand voice?
JW> Definitely.  It’s really important to us as a brand that we capture that. On the one hand we’re very honest and genuine and on the other we want to have that humour and that fun. I think we’ve got the perfect balance with ‘The Hobbit’ video; we get the important messages through, it’s shot in a way that is obviously cinematic, it engages fans and there are these humourous moments that carry it through.
The response has been great on board. Obviously we are excited about the pick-up online, but the most important thing is people watching it before take off.
First and foremost, it’s about providing a safety message; these videos are about making people pay attention and watch.  You have to get a balance between making something that is very entertaining and making something that is very clear.

LBB> The past Air New Zealand campaigns share that irreverence. Some of our readers might not be aware of these creative efforts. Could you talk us through them – for example the character Rico?
JW> (laughs) We had a puppet called Rico, which we developed with the Jim Henson company. Rico was an international traveller and a man of mystery. He became a marketing tool for us at the time to communicate a new product; a new aircraft with a number of new features. When you’re launching something like that you have customers who have a latent interest because they fly with you all the time and then there’s a whole load of people who really aren’t too bothered. For us Rico was the way to engage people on these different levels. He communicated who we are as an airline, and his secondary function was to get some of our product messages across. We targeted him at an international audience and he did a great job for us.
And then we decided to kill him off.


When we ended that campaign, rather than just abandoning him and leaving him to go stagnant we decided that killing him off would engage with his fans. He had a huge number of Facebook fans. We engaged with Hasbro, who own the game Cluedo. We created our own version of the game and everyone who had worked with Rico over his two year journey – including Snoop Dogg and Richard Simmonds - were suspects. People could go online and guess who had killed Rico. It was a fun way to end that campaign and a bold way to do it, instead of, you know, having a mascot who just disappears and no one quite knows what’s happened.
LBB> It seems that with airlines, consumers do develop personal relationships with the various brands and have quite definite ideas of their ‘personalities’ – you’ve embraced that.
JW> We have. I think we definitely pride ourselves in our people.  We have a set of values that we instil across the organisation. They’re not your normal corporate statements, they’re very simple, and they’re very can-do: ‘be yourself’, ‘welcome as a friend’, that sort of thing. That comes through with our people and the relationship they have with our customers and the way we approach our marketing.
When you think about the airline category, it’s quite traditional, but we are thinking about things and doing things in a fresh and unique way. We’re not being ordinary; we want to be different, whether that’s through our product, through our people or through our communications.
LBB> So where is the Air New Zealand Hobbit tie-in going to go next?
JW> I guess the next cab off the rank will be our flying billboard. One of our 777 300 crafts will be themed as a hobbit plane. It’s flying on the Los Angeles and London routes and is due for release before the premiere on the 28th of November. We have a number of ways that we are going to leverage the movie – not just through fun and creative content but to market air fares, retail activity, and destination activity. We’re also partnering with Tourism New Zealand on different campaigns. It’s very important and it’s going to be a key part of our marketing. Our health and safety video has had about 7.3 million views to date. It’s certainly a record for us so far – particularly how quickly it’s gained coverage.
LBB> And what form will the Hobbit-themed aeroplane take?
JW> We’ve got a few things planned. We’ve got some Hobbit socks and eyeshades which we will give out on selected flights flying into New Zealand nearer the time of the premiere. There will be a series of themed Air Bridges and we’ve got a baggage carousel too; we’re building a structure around it that looks like Bag End in The Hobbit. We’re due to install it in ten days…. when people’s bags come out of the carousel it looks very funny.
We’ve got t-shirts for staff saying things like ‘let me check your Baggins’ and ‘elf and safety’ – we like to engage. It’s great to think about the customer journey – what people experience. We’ve thought about a few key touch points where we can integrate the theme in a fun way. We’ve got ‘A Hobbit’s Tale’, which is a dedicated channel in our inflight entertainment system and we’ve got a dedicated 25-page magazine coming out at the end of November.
LBB> How long has it taken you to implement the whole project?
JW> In terms of the creativity and the development it has probably taken about nine months. Like any process you go through creatively there’s always a bunch of ideas that come up. You have to figure out what the hero ideas will be and how we can build around them. What is going to have the biggest impact?
We worked with Weta and Warner Brothers on the hobbit plane. Draftfcb, who are our advertising agency, have worked with us on the baggage carousel and the themed air bridges. We have our own in-house design team that has been working on all the collateral. It’s been a real collaborative effort – and we’ve had a big team working alongside our small in-house team to make sure that the whole thing has a sense of consistency.
LBB> Why was it important to you to devote so much time and effort into developing the tie-in and what do you hope that attention to detail will provide?
JW> We would never be in a relationship if all we could do was put our logo on something. With us we need to integrate it into the experience and we have to think about where we can leverage a partnership for Air New Zealand at every part of the journey, to make it work really hard for us. That’s why we are integrating the campaign with our retail offering because we need to provide a return on our investment and promote New Zealand as a destination. You need more than just a logo for a partnership like this to give value. When people experience this campaign, they will get a direct understanding of who we are as Air New Zealand. Whoever that person is, whether it’s a customer, a member of the media or one of the movie’s cast, we want them to have a great experience and to associate that experience with us as a brand.
It’s been an awesome journey and what’s helped has been our great working relationship with Warner Brothers. In a project like this, when you’ve got multiple stakeholders, it’s really important to take people on the journey and get them excited about it.
view more - Brand Insight