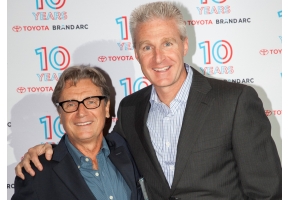 Brand Arc, a Los Angeles-based branded entertainment agency responsible for developing groundbreaking product integrations across all media platforms, is celebrating its 10th year of working with Toyota. The milestone was marked by an honorary event on the evening of December 1 at the Toyota Auto Museum in Torrance, CA.

The Toyota-Brand Arc collaboration—a dynamic relationship that connects the car brand to entertainment content across TV, digital and social and theatrical channels—has resulted in several industry firsts. Brand Arc’s deals for the automaker include highly visible integration into all six seasons of the ABC Emmy-winning comedy “Modern Family” and 11 consecutive seasons in Bravo hit “Top Chef”. Brand Arc received a One Show Entertainment Gold Pencil for deftly integrating Toyota into several seasons of the HBO comedy “Curb Your Enthusiasm,” in which “accidental brand ambassador” Larry David often encountered absurd situations while behind the wheel of his Prius. For CBS series “Under the Dome,” the shop brokered a deal in which the Toyota Prius Plug-in played a key “hero” role.

Toyota Marketing Group Vice President Jack Hollis, a core member of the Senior Global Management Team, acknowledged the successful partnership and the work Brand Arc has created over the past decade for Toyota.

Brand Arc Founder and CEO Rob Donnell told guests how his company has thrived due to the collaborative and creative partnership.

“It’s practically unheard of for a major multinational like Toyota to choose a small entertainment-marketing shop as its AOR, but we use our size as an advantage,” said Donnell. “We are nimble and opportunistic, and every day we ponder how we can push the creativity bar even further for Toyota.”