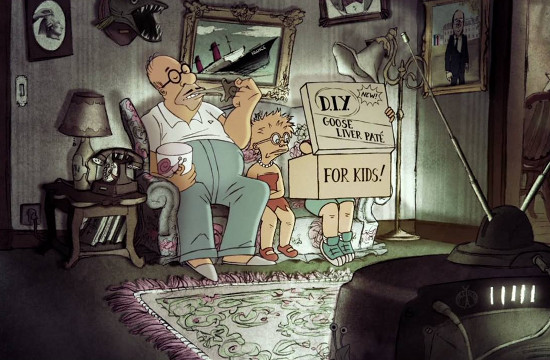 We go to space and back with some more creative treats.

A lot of people have, very deservedly, congratulated the talented folks at Framestore for their perfect trio of Oscar, BAFTA and VES awards. But this one’s the best, surely?

Back to the Future fans had their dreams come true and then almost immediately smashed this week with the launch of the HUVr hoverboard. The whole affair, which included this launch video with Christopher Lloyd, a.k.a. Dr. Emmett 'Doc' Brown from the film trilogy, and ex-pro skateboarder Tony Hawk, was obviously a hoax. We can all live in hope, though. After all, it’s not quite 2015 yet.

Lend me a book and you won't be seeing it for a long time. Not because I've lost it, but because I'm such a slow reader. Spritz promises to help not just plodders like me, but even the most avid of bookworms read quicker. According to its creators, our eyes seek a certain point of a word - called the 'optimal recognition point' or ORP - when we read. That 'hunting', so to speak, means we spend only 20 per cent reading time actually processing content and a whopping 80 per cent exercising our retinas from word-to-word. The Spritz app cleverly cuts that out by firing text on to your screen with the ORP in the same place that you're already looking. Learn more at: http://www.spritzinc.com/

This is like the most sinister game of musical chairs ever. Inspired by the cheery-sounding song’s quite sombre lyrics of 'The drumbeat will beat you up', studio Job, Joris & Marieke crafted these not-as-innocent-as-they-look stripy characters that dash from rooftop-to-rooftop in an attempting to outwit their counterparts.

Manuel Ferrari, of Dutch VFX house The Ambassadors, lets loose with this short film of a strange creature with the jitterbugs. I'm hoping that you'll  all follow suit and throw some shapes like that this weekend.