Brain Food: 8 Creative Pieces of Kit to Keep You Running

Trends and Insight 441 Add to collection 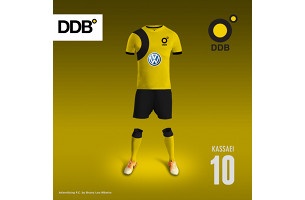 Brain Food has taken an alternative turn for the energetic this week. There’s new Nike tech that tells you what you’re running from instead of where to (it’s a spoof, really), dinosaur-shaped hi-top sneakers, agencies brilliantly imagined as football teams, and fishy-themed socks to keep your exercise jovial. We’ve also dealt up a fitting tribute to the late Robin Williams, a dressing-down of Discovery’s Shark Week, an animated short complete with an 8-bit wasp and a hipster lumberjack, and more…

Brazilian-born Hasan & Partners art director Bruno Leo Ribeiro has turned some of adand’s top agencies into football teams with these super slick soccer strips. The kits are adorned with the agency’s biggest client as sponsor and creative chiefs have been humbled with the sport’s sacred number 10 jersey. Adland Cannes World Cup 2015? I think so! Check out the full selection on the project’s dedicated Tumblr.

The genius Nike+ technology can currently tell you how far you’re running, but can it tell you what you’re running from? Not yet. But as this spoof report from The Onion tells, it’s just around the corner. So what’s pushing you to stick on your sneakers and venture outside? Your stalling career? A hateful? Or perhaps something even deeper and darker?

“Solving society's problem of a lack of wearable dinosaurs.” Yes this is a Kickstarter for Triceratops themed/shaped hi-top trainers. It needs $15,000 more to reach its goal, so get donating here. Just think how happy your kids (or perhaps you) will be this Christmas! See more and donate here.

An 8-bit mega wasp causes havoc in this glorious animated short by Joel Mackenzie. The spot won Best Music Video at Animation Block Party 2014 and features a retired hipster lumberjack (right?) setting out to save his buddies from the stinging beast.

There were, understandably, heaps-upon-heaps of tributes to the late Robin Williams. Here’s Jimmy Fallon’s from a recent episode of The Tonight Show, which includes a hilarious clip of Williams’ first appearance on the programme.

High-pitched fangirls get the David Attenborough nature treatment in this cleverly put together and amusing film. ‘Homo screamius’, as YouTube user and the film’s creator Ali Jardz has named them, were observed at the recent 2014 Summer in the City YouTube festival in London.