Brain Food: 6 Creative Ideas for Your Friends and Your Foes

Trends and Insight 374 Add to collection 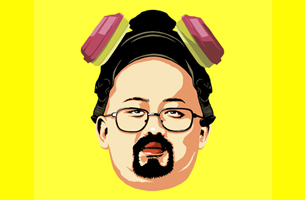 Revel in more random creative goodness from LBB’s Addison Capper. Find out what happened when Kim Jong-un came out to play with pop culture, why revenge is best served covered in glitter, how a failed N64 device is aiding a top animator and why 1998 was such a fantastic year for, well, everything.

North Korean leader Kim Jong-un is re-imagined as various pop culture icons in this mimicking series from Brazilian artist Butcher Billy. The artwork is really quite clever, but it'd be nothing without the brilliantly bulbous head of the ruthless dictator. Check out the full series here.

The Nintendo Power Glove was a gaming flop from the N64 era. But despite the dodgy video game controller never really taking off, Robot Chicken animator Dillon Markey has converted one into a Bluetooth, stop-motion animation tool that allows him to shoot a frame of footage without wandering back to the camera.

If you work in the revenge business, the chances are you're a hitman that kills people for a living. But a startup in Australia is shaking up the revenge business with its offering to ship glitter to your enemies - or send "the herpes of the craft world" as founder Mathew Carpenter so poetically puts it. Yes, essentially you can pay to have your enemies glitter bombed for a cool $10. A much less drastic (and I imagine cheaper) way of reaping revenge on those that have double-crossed you. And it seems there are a lot of people out there with a lot of enemies. After the concept was covered on Reddit and numerous news websites, ShipYourEnemiesGlitter.com crashed after thousands of global orders.

Director Spike Lee's latest movie 'Da Sweet Blood of Jesus' is about a group of upper middle-class folk who've developed an addiction to drinking blood. It looks ok. What's interesting, though, is that Lee is set to release the feature on Vimeo one month prior to theatrical release. The motive behind his move isn't known, but it could well be the fact that the modern-day vampire movie was funded thanks to $1.25 million worth of cash gathered on Kickstarter. Watch Lee's announcement and the film here.

This is 15-minutes of totally radical, 90s-tastic nostalgia. Yesterday I said I'd "just watch the start". 15 minutes later and I'd sat through the whole thing. Enjoy!

Watching this two-year-old rocking out to Foo Fighters is both super cute and completely bamboozling.