Bowie, Jagger and Jackson: How David Smith Worked With Them All

Absolute Post’s founder and owner on cutting, grading and editing some of the world’s most popular music promos during the height of MTV 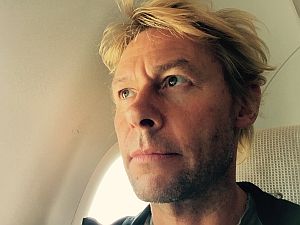 David Smith, founder of Absolute Post, takes LBB through the heady days of the 1980’s, from his time as a runner to the moment Michael Jackson’s Thriller just fell in his lap.

LBB > You’ve been involved in some of the greatest music promos of all time. How did you start out in the industry?

David > Like everybody else, I started off as a runner. That’s the great thing about this industry, you can start at the same level and get the same opportunities to climb the ladder. My first position was at an editing house called Mike Kauffman’s, and I immediately knew that I’d found my career.

I started out on the film side and learnt an awful lot about the chemical processes, the nuts and bolts behind what goes into film. These were the days when if you wanted any kind of special effects you had to do it all optically. Even doing a dissolve between one shot and another meant sending the film off to a film optical house that would take 24 hours just to do a single dissolve.

The film editing department was a great grounding early in my career, but I soon made the switch to video. 37 years down the line and I think I made the right choice.

LBB > What motivated the change from film to video?

David> A girl. I’d moved over to Rushes, who at the time was still just an editorial house, and I was trying to impress this girl by showing her where I worked. Unfortunately, she was rather bored by the cans of film covered in sellotape and the general mess of the editing department. But then I took her downstairs to the video side of the online editing department. There were these vision mixers with lots of lights flashing and stuff and she seemed more intrigued. So, I thought I might need a career change.

I transitioned into the new grading suite Rushes had established, and the eye for colour I’d learnt from my days handling film served me well. It was at Rushes, during the early days of MTV, that I started grading promos more and more.

LBB > How did you end up working on such a classic as Thriller?

David > Just luck really. I was working a Saturday and had popped over the road to see a few of my old editing buddies in some local café. They asked me what I was doing and I told them that a load of cans had been delivered the night before with ‘Thriller’ written on them. They were pretty amazed, but in all honesty it was a pretty normal job. The weird thing was, even though Thriller was a huge deal, no one even attended the grade.

LBB > So was it standard practice to have the musicians come in to the office?

David > Pretty much. In those days, they were always trying to tell a story with their promo. So I could have Mick Jagger or David Bowie in the suite and they would have a real idea of how they wanted the promo to look and how they wanted it cut. It really would be a collaboration between us to get their story across in the best way possible. And I found that the bigger the star, the more professional they were.

The less known bands and artists were certainly less professional, but definitely still a lot of fun. Some would come in and start ordering champagne, sushi and be doing all sorts of recreational activities in the suite. Needless to say, they were the bands who didn’t stand the test of time. Often, the extras they ordered would come to more than the cost of the edit – but I never had the heart to tell them.

LBB > Did the Bowies and the Jaggers get involved in the grade as well?

David > In the early days of grading, the artists wouldn’t always be bold enough to say they wanted a particular ‘look’. So if you did come up with an original style in the grade, everybody would be completely bowled over – or they would be confused and just ask, ‘why is it a funny colour?’

The Rolling Stones’ ‘Undercover of the Night’ was one promo that did push the boundaries. The director, Julien Temple, wanted a really dark and gritty grade, which was great because the '80s was awash with colour and really bright promos. It was a bit of a risk, but that’s what ground-breaking directors and artists do – take risks.

I remember the promo premiered late at night on Channel 4 because in one scene someone gets shot in the back of the head. Musicians in those days had a lot of fun getting creative with their promos. And I had a lot of fun being involved!

LBB > Would you say that the MTV-days of music videos had more theatre or style than today’s promos? If so, why?

In the early days of MTV, the budgets for pop videos were about 1000% larger than they would be for the same artist nowadays. There is very little money to go around now for a music video, however much of a mega star the artist may be. The good pop promo directors of 2016 can still get a great theatrical atmosphere to their promos with a small budget and careful and artistic direction, but mostly, the dependence is upon girls twerking and that is something that will quickly be copied and, therefore, become repetitive because it’s not about the dancers for me, it’s about promoting the singer or group and their track with imaginative images.  So often now, there is an entire 3 minutes of promo with bottoms wagging – nice, but not telling me anything about the actual artist.

LBB > Why would you say that there was more money in promos in those days?

David > At the time I didn’t care about the money; I just took to it and felt comfortable. But there were massive budgets out there. MTV had just started and there was a real buzz around the music industry, especially music videos. Because Rushes was known for promos, all the big directors – Julian Temple, Steve Barron  – used to go there and it just so happened that they had the big promos and therefore the big budgets. In those days, promos were a great way for bands and artists to sell themselves, their albums or tours – it’s just not the same today.

LBB > How did the technology progress throughout your career? Was it a sudden leap or a slow progression?

David > It was a slow progression. I started noticing the change when I left Rushes for VTR. Back in the days of working with one inch analogue video tape, if you wanted any effects you had to transfer it to another video tape, then bounce that to yet another video tape. It was like recording over a VHS over and over again – the quality is always going to get worse.

When digital arrived it meant you could do as many copies as you wanted without losing any quality – but there were massive limitations. You could do say 30 seconds of special effects at once, but at the end of the 30 seconds your disk was full. It was still a very laborious process.

As technology progressed, it revolutionised the complete process. No longer restrained by technology, you had a complete open hand about the creative side of how you went about achieving fantastic imagery. The equipment became a tool and not a burden, but to this day (and I’m not undermining the technology) it’s all about the vision.

LBB> Is there any comparison at all with today’s tech and the kit you started off working on?

David > It’s chalk and cheese really. Throughout the 80s, you could have some amazingly creative ideas for your promo or commercial, but it wasn’t always possible to achieve. You might want things flying around and effects all over the place, but you were constrained by what the tech could do.

Today, the technology is really just a toolbox. You don’t have to think about limitations because there aren’t any. Virtually anything is possible with today’s kit – given you have enough time and money!

LBB> Do you think people may be a little too reliant on tech nowadays?

David > Yes and no. If you look at Thriller, all of the incredible effects in that were done in-camera with prosthetics. I don’t know if people would even consider that nowadays – which I think is both good and bad. Today’s technology can allow you to do things that are often hard to believe, but it’s about striking a balance. At Absolute, we try and tell clients and directors that shooting as much as you can in-camera, and then complementing that with VFX, will result in the best finished product.

LBB > What would you say is the one promo you weren’t involved with that you wish you had been?

Hmmmm. Tough one. Queen - Bohemian Rhapsody for the sheer bonkers of the strangest, most inspired and least-understood songs in the history of rock; however, I was too young!

Johnny cash – Hurt, iconic musician who lived a thousand lives and produced one of the most powerful performances in a music video ever seen.

However, the video going around in my time that I wish I’d been associated with is probably Peter Gabriel – Sledgehammer. Great idea, brilliantly executed and directed and just a fantastic track.