The two join the company for US commercial representation 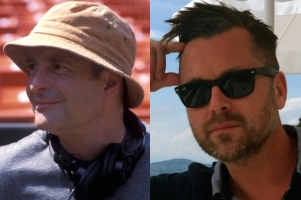 New York/San Francisco-based content creation/production company Bodega has signed directors Jon Dennis and Randy Hackett for U.S. commercial representation. This marks the first official U.S. representation for Dennis, who has a diverse directorial background spanning commercials, live sports, branded content, and network promos for the likes of BBC, Sky and Channel 4. Hackett is a copywriter-turned-director who brings a sharp eye for casting to deliver singular comedic performances that earned him numerous industry accolades for his directing and writing including AICP, Hatch, New York Festivals and Clios.

UK-born, South Africa-raised Dennis maintains a lifelong fascination and passion for filmmaking and boasts a talent for capturing real people’s stories and turning them into vibrant, memorable performances. After attending film school, he got his professional start working on British films such as Gary Oldman’s “Nil by Mouth” before kicking off his directorial career in live sports. Dennis turned his focus to directing television promos for the BBC and Sky before joining Channel 4 and Tantrum as a commercial director for brands such as ING, Westfield, Yazoo, BMW and Dream Bingo, winning 10 Promax Gold awards, a Creative Circle Award and a Kinsale Shark award along the way. His most recent project out of Bodega is a spot for Arm & Hammer Clump & Seal cat litter through Ferrara & Co.

Notes Dennis, “Bodega’s diverse range of work and production through post capabilities really suits my background and approach as a director. I’m really looking forward to collaborating with their entire team.”

Native New Yorker Randy Hackett began his career as a copywriter, rapidly rising up the food chain to become creative director before shifting to a full time director. Known for his unique comic realism, Hackett has a penchant for embedding humor in his expert storytelling and art direction. His talent for eliciting authentic performances from actors can be seen in his work ranging from campaigns featuring celebrities, actors and athletes to spots centering on ordinary people who find themselves in extraordinary situations. He has worked with brands such as ESPN, Delta Airlines, Showtime, Comcast, Volvo, Microsoft, Vonage, Motel 6, USA Network and ABC-TV and talent ranging from Jimmy Kimmel to David Ortiz, Billy Blanks, Kirstie Alley, Jose Bautista, Rob Lowe, Sally Fields, Terry Bradshaw, Jamie Pressley, Teri Hatcher and Eric Dane. Hackett’s work has earned him numerous awards, including Clio, One Show, Hatch and New York Festivals awards.

“I am intrigued by the diversity of projects that Bodega is involved with. The fact that they have footholds in both the advertising, direct to brand and the network promo world is really appealing to me as a director and writer,” adds Hackett. “They have a forward-thinking mindset about the business and are proactive about how they approach non-traditional opportunities in the market.”

Says Bodega Executive Producer/Partner Clint Goldman, “Both these guys are filmmakers and writers that direct so they fit well into our content creation world. Even better, they are super funny which helps me get through my day(s).”