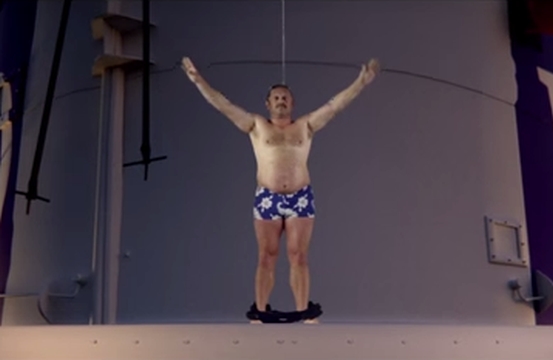 P&O Cruises has launched its biggest advertising campaign yet, via BMF urging ‘Earthlings’ to be free and move to another world, as P&O Cruises repositions itself under the ‘Like no Place on Earth’ tag line.

The multi-channel campaign that seeks to convert ‘Earthlings’ into ‘Cruiselings’ rolls out across Australia and New Zealand this week.

BMF Executive Creative Director Cam Blackley said: “Our purpose is to rid the planet of Earthlings. That’s a phenomenal brief and lofty goal but we believe we can do it peacefully through the promise of greater freedom.”

P&O Cruises invites Earthlings to meet Cruiselings at www.befreeearthlings.com. Using first person video storytelling, the Food Fanatic, the Adventure Lord and the Now Girl tell their stories and show Earthlings how best to be free on a P&O Cruise.

P&O Cruises’ fans can also win a place on the inaugural cruise of one of its newest ships, Pacific Aria, by composing their own 30-second song online with a special ship horn keyboard. The custom-built keyboard replicates the sound of a ship horn to allow users to play or compose their own music. The winning song will actually be played by the ship’s horns.

P&O Cruises Marketing and Distribution Director Simon Cheng said: “P&O Cruises is about to enter a new era of cruising with its biggest ever fleet, so we really wanted an advertising campaign which would make people appreciate how a cruise holiday takes you to another world, free from the routine of life. This campaign really conveys the feeling of escape, freedom and space that a P&O cruise delivers.”