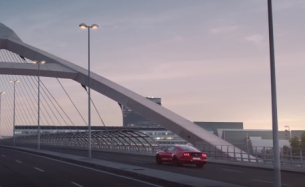 The Ford Mustang has arrived in Europe for the first time in its 50 year history. Blue Hive (WPP’s Creative Agency for Ford) is launching a 360 Pan European campaign to announce this highly anticipated car launch.

The campaign includes Digital, Press, OOH, DOOH and a 60 second film. The film will premier in only the most premium handpicked cinema and TV placements across the continent.

The film was shot at iconic European landmarks - including the Colosseum in Rome, Regent St in London, the Brandenburg Gate in Berlin and the Eiffel Tower and Notre Dame in Paris. This was an ambitious undertaking involving the closing down of major roads and lead to an unprecedented amount of location permitting. It is a sequel to last year’s pre-launch film. This time the story of ‘The Road Awaits’ continues and culminates in an innovative 'one-take'-shot where the camera allows the viewer to actually step inside the Mustang and drive it away, first-person. The music itself also took on an even more epic feel as Blue Hive were able to secure the help of Jimi Hendrix himself as the legendary guitarist's track ‘If 6 was 9’ provides the score to the film.

“We were given a completely unique opportunity: to reimagine the world’s most iconic car and introduce it to a new continent. It was absolutely key that we ensured the launch gave credence to this momentous occasion and the epic nature of the car itself. Using Hendrix was a huge coup for us and seemed to complete the story in the most visceral way possible,” said Blue Hive’s Deputy Executive Creative Director, Steve Clarke.

“The arrival of Mustang in Europe is a huge milestone for Ford. We needed to ensure we gave Mustang the epic launch it truly deserves. The campaign was an ambitious undertaking and we are absolutely delighted with the end result,” said Usha Raghavachari, Manager, Marketing Communications, Ford of Europe.