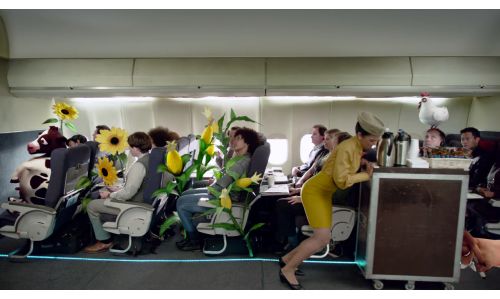 Director Roderick Fenske brings the farm to the table – or shall we say tablet – with the new broadcast campaign for Zynga’s popular simulation game, FarmVille 2: Country Escape.  Roderick directs four 30 second spots, each showcasing absurd scenarios in which the the virtual farm jumps off the tablet and into real life settings.  As the animated crops and animals cause a stir everywhere from an airplane to the nail spa, the engrossed gamers simply smile and continue farming away.

“The challenge was to make it look as realistic as possible while staying true to the design and characters of the FarmVille game”, says Roderick Fenske. To achieve this, Roderick used a combination of practical in-camera effects using models fashioned after the crops then augmented with animated elements that were later brought in using CG. In the workplace setting, for example, the model of the sunflower actually did grow out from the desk and knock the papers out of the way, giving a realistic look and lifelike movement to the scene. The animated farm animals were then added in VFX, with careful attention paid to make sure all of the elements looked seamlessly integrated. "By blurring the worlds of CG and real practical effects, we're keeping the audience guessing and hopefully amazed as to how we pulled it off."

Roderick Fenske is an award-winning commercial director signed to Dapper, the comedy division of Believe Media.