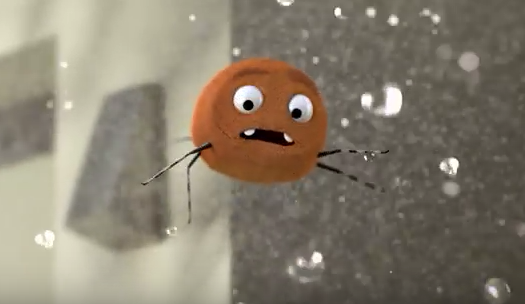 Sydney creative agency BLOKE has created the latest animated character in Australian advertising in the form of Gert the Spider. The animated spider will be making grand debut in television commercials for Gerni to launch its latest pressure cleaner, the PowerGrip.

BLOKE worked with Gerni last year in a similar concept, but Gert has been freshly redesigned from a regular spider to something with more character and personality for the new campaign.

“Last year we were asked to showcase the Gerni Auto Accessories for the Gerni Titan,” says BLOKE creative director Mike O’Rourke. “So we did a product demonstration from the point of view of ‘that spider that lives in your wing mirror’. It’s getting hard for Gert to find somewhere to hide!”

Gerni have become an iconic brand for their exceptional quality high pressure cleaners, which has seen their name become synonymous with the product across numerous industries.

The power and versatility of the new technology is the inspiration behind the new animated character. Telling the story from the spider’s point of view enabled BLOKE to clearly demonstrate the versatility and easy functionality of the pressure cleaner.

Over the last 12 months Gert has come a long way with the help of Hackett Films. “We wanted to create a loveable spider,” explains James Hackett. “People have to really feel for Gert as he tries to escape the awesome power of Gerni.”

While the character is still in its infancy, BLOKE wanted to pay homage to the greats of the past like Louis the Fly, Mr Sheen and Norm.

The new Gert can be seen in TV commercials for Gerni PowerGrip over the course of September, but will continue to make appearances in future Gerni TVCs.