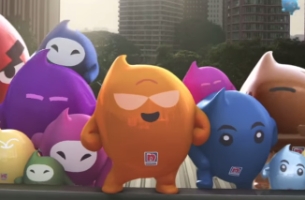 TBWA\Kuala Lumpur has launched a new television commercial for Nippon Paint, in line with the paint giant’s new position as ‘The Coatings Expert’.

As Malaysia’s premier coatings solutions provider, Nippon Paint is evolving to meet diverse industry needs by introducing new coating solutions for all types of surfaces such as cement, wood, glass and metal. The company is also seeking to expand its coating solutions to serve the architectural, automotive, industrial and marine segments.

The television commercial showcases Nippon’s Blobbies – blobs of paint that come to life to coat all types of surfaces – adding colour and life to a dull and grey city. With a mixture of parkour-like movements, high-energy music, great editing and fantastic animation, the television commercial injected fresh life to Nippon’s Blobbies, who first graced our screens in 2008.

“It was a fun project to do,” said Sa'ad Hussein, Chief Creative Officer at TBWA\Kuala Lumpur. “Getting the Blobbies just right, making sure their movements looked natural, and how they interacted with the surfaces were a challenge, but it was a great challenge to have.”

“We’re thankful to MFX, the animation and visual effects team, who did a fantastic job of bringing the Blobbies to life, and to Jeff Wood, the film director, whose storytelling and ideas helped turn our board into something great.”

The television commercial was shown for the first time to a packed house of Nippon staff, members of the media, as well as its creative and media agencies, at the Nippon Coatings Expert launch event, held at the Grand Millennium Hotel in Kuala Lumpur, on May 8.

Guests were then treated to a fun photo session at Nippon’s Blobbies sculpture exhibition, located at the outdoor deck of Fahrenheit 88, right opposite the hotel. The Blobbies sculpture measured up to eight feet tall, and featured Blobbies made from different materials, like wood, ceramic tiles, cement and metal.