Zombie is represented by Blinkink in the UK, with the film being produced in Zombie's Sao Paolo studios in conjunction with GTB Brazil 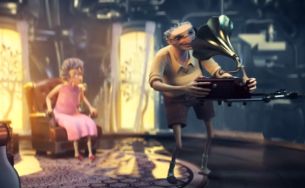 In this epic commercial for Ford Trucks, Zombie's 3D animation explores the small journeys we experience in our everyday lives, set against the backdrop of the heart of the truck industry - the engine.

Different sentimental scenes are choreographed within the inner workings of an engine - a wedding day, an aspiring footballer receiving the perfect pair of boots, an elderly couple rediscovering their youth - the film ties all the stories together as the Ford Truck is poetically shown to be integral to each one.

Zombie is represented by Blinkink in the UK, with the film being produced in Zombie's Sao Paolo studios in conjunction with GTB Brazil. The film marks a departure from typical truck advertising, placing more emphasis on a story that will resonate with the audiences emotions rather than impress them with technical jargon.

"It sure was one of the toughest technical and narrative challenges we've ever had. Harmonising emotional stories, and turning the gears of a truck's engine into a world of imagination, was a task that required a lot of talent and affection from the entire team. It was four months of work with a team of 60 dedicated people, a lot of research, and a lot of desire to make this script a beautiful story worth seeing," says Paulo Garcia, co-founder and Chief Creative of Zombie Studio.