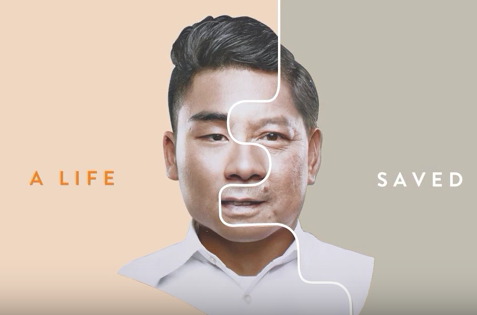 For the best part of a year, the Bone Marrow Donor Programme (BMDP) has been working with Blak Labs to build an integrated recruitment campaign to sign up new donors

The campaign called “#Match4Life” launches across digital, outdoor and social channels just in time for the inaugural World Marrow Donor Day on September 19th. At the heart of the campaign is an exhibition at 313@Orchard as well supplementary street team activities to drive awareness and donor recruitment.

The content features past recipients of bone marrow donations, as well as young donors from the Malay, Indian and Chinese community.

“When we receive a request to find a match for a patient, all other treatment options have failed and at that stage it’s transplant or die. Our challenge is that there is a 1 in 20,000 chance of finding a matching donor,” said Jane Prior, CEO of Singapore’s Bone Marrow Donor Programme.

“It’s a huge issue as six people in Singapore are diagnosed with a blood cancer such as lymphoma or leukaemia every single day. For many of these patients a transplant is their only chance of survival which is why we urgently need more people to sign up and join the register,” Prior adds.

The campaign is the first phase in the BMDP’s drive to grow the registry by 50,000 new donors over the next three years, but it faces a number of challenges. Amongst these, Prior cites misconceptions around donation methods, loss of virility and faith as being the hardest to overcome.

“We’re working hard to attract new donors from both the Malay and Indian communities. These communities are hampered by their small size and faith issues, which have prevented donations in the past. We have a fatwa from the MUIS (Majlis Ugama Islam Singapura) that gives every Muslim permission to step up and help their fellow man or woman. Plus we have the amazing stories from Farhan and Shalini, who both overcame family and social pressure to make their donations.”

To create the content, Blak Labs taped a series of interviews with survivors and donors to get their experiences straight from the heart.

“We’re delighted to be able to support BMDP in their drive to reach 50,000 new donors. This isn’t just another campaign. If it works, it actually means that lives will be saved,” said Charlie Blower, co-founder and managing partner of Blak Labs.

“The campaign is deliberately lo-fi and unfiltered because we want the real emotions and experiences of these remarkable survivors and the amazing donors to come through,” adds Blower.

In addition to support from Blak Labs, the BMDP campaign has been helped off the ground with media sponsorship raised through UM, backend digital support from Crimson Works, photography by Ric Tang of Tangography and video production by The Reel Thing.

“We’d like to take this opportunity to thank the team at UM. They’ve done a fantastic job of securing media sponsorship worth S$120,000 across multiple channels and media owners. The guys at Crimson Works have also worked hard to help us simplify the registration process. Now it’s easier for potential donors to sign up. And with Salesforce support, it’s faster for BMDP to get their swab kits out to potential donors. The support from the guys at The Reel Thing and Tangography has been amazing.”