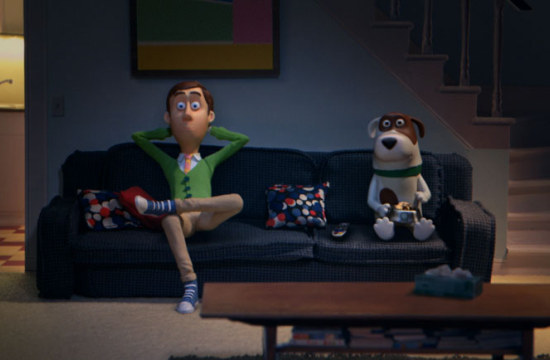 In the newest round of spots for Optimum, director Geoffroy de Crécy of WIZZ (Blacklist) and The Brooklyn Brothers joined forces once again to follow the animated adventures of Ben and HotSpot, as the two buddies go about their day and discover new and exciting ways to stay connected.

“The familiar banter between these characters in their hometown lends an episodic quality to the work,” commented Blacklist Executive Producer Adina Sales. “In this round of production, we were able to refresh and expand Ben and HotSpot’s world while pushing the production design and fabrication to an even higher level.”

To capture the true tri-state feel, WIZZ flew in from Paris to shoot reference images at multiple locations around New York, New Jersey and Connecticut. They continued production back in France, spending the following weeks applying the images to cardboard environments and creating detailed miniature sets. Using 3D-printed models of Ben and HotSpot, the team planned for camera, lighting and scale and integrated the CG characters in post.

“Using both physical and digital set elements created a fun yet mature stop motion feel for these films,” commented WIZZ Director Geoffroy DeCrecy. “A lot of detailed pieces — like the gym bench and the sofa — are real models made of fabric and give the spots an adult vibe which we wouldn’t have been able to achieve on the computer alone.”

The team had to be strategic when shooting in the scaled down sets. Removing ceilings and walls helped capture specific camera angles and using hi-tech, miniature light bulbs within the scenes allowed for precise lighting conditions while adding to the films’ lifelike qualities.