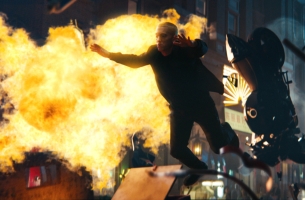 Blackbird has added Sam Hall to the team as executive producer. Sam has over 20 years of experience working across production, design and visual effects, both in Australia and in the UK.

Sam’s first challenge with Blackbird was no small feat. She jumped right in on Eminem’s latest branded content film, Phenomenal.

Prior to joining Blackbird, Sam produced a world first augmented reality project for Ferrari Australasia, combining her skills in design, vfx and animation for the new platform. She now looks forward to working alongside Blackbird owner & VFX Supervisor Nick Ponzoni in continuing the growth of the company and in further cementing their great reputation for delivering high-end visual effects and post production.

Sam says: “I’m so excited to be working with Nick and the team at Blackbird. The work is outstanding and they are the ones to watch within their very competitive field.”

Nick says “The timing has been perfect with Sam signing on this year. The company is on an upwards trajectory with a body of work I’m really proud of, she will play an integral role in taking the studio forward in terms of growth both creatively and logistically.”

The 7-minute film was initially released exclusively on Apple Music and features cameos from John Malkovich and Dr. Dre. The film is the continuation of an ongoing relationship with LA based Director, Rich Lee and production company DNA, and is the second music video collaboration with Eminem.

Nick has always enjoyed a challenge and this music video was no exception. The Phenomenal project had an extremely short turn around with 39 high-end visual effects shots to complete in just under 2 weeks.

Nick says “Rich and I have had a fantastic collaboration over the past couple of years. We both enjoy working under pressure and creatively problem solving. Together we always seem to pull off what on paper seems impossible”.