Together they launch BackingBlackBusiness.com hoping to reframe the importance of Black-owned small businesses 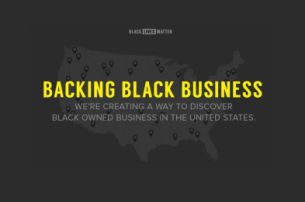 Black Lives Matter has announced its strategic and creative partnership with J. Walter Thompson New York which kicks off with the launch, in beta, of BackingBlackBusiness.com, a web tool allowing people to easily discover Black-owned small businesses throughout the United States.

Black Lives Matter will work with J. Walter Thompson New York to strategically plan their 2017 communications and events; a year which the organisation wants to make about building Black power.

J. Walter Thompson New York aims to create game-changing campaigns that will inspire, inform and influence behaviour, hoping to play a key role in tackling the racial challenges facing society. One of the agency’s challenges will be to help establish the movement in time and beyond the hashtag which made it famous.

“We’re thrilled to partner with J. Walter Thompson and in particular this effort to uplift and sustain Black businesses,” said Patrisse Cullors, Co-founder, Black Lives Matter. “Right now, we need to invest in Black businesses more than ever.”

Lynn Power, CEO, J. Walter Thompson New York, said: “Working in advertising, I believe that the messages we push out have an impact and that we have a responsibility to try and shape culture positively. I am really glad that our partnership with Black Lives Matter is giving us the opportunity to play a truly active role.”

The first piece of work from the agency is a web tool called Backing Black Business which aims to reframe the importance and the role of Black-owned small businesses for the Black community in today’s political landscape. It also hopes to draw attention to the large and often underestimated racial disparities in business ownership.

The Google map-based tool gives people the opportunity to use their dollars to support local Black-owned businesses in order to have a national impact. The site aims to become the biggest and most easily accessible Black businesses database in the country.

BackingBlackBusiness.com launches in Beta today with over 300 businesses. The goal is to have a good representation of Black-owned businesses in all states on the site by the end of 2017 - the website will be an ongoing effort for both teams. The site allows Black owners to add themselves to the map, making data collection easier. It will be supported by an online social and influencer campaign as well as local promotion campaign.