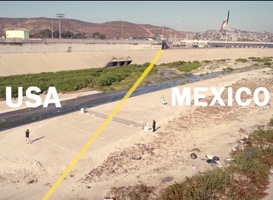 The world of today is full of conflicts. These conflicts lead to frustration, causing people and nations to build walls between each other. But why build walls, when we could get to know and learn from one another instead? That’s why Swedish sportswear brand Björn Borg has established a tennis match on the U.S. – Mexican border, at Tijuana River, where a game has been played between tennis players Mariano Argote (MX) and Peter Clemente (US).

Henrik Bunge, CEO of Björn Borg, said: “Borg Open is our way to state that we, as a sportswear brand, believe in an open world. Unfortunately, the activity is not likely to make those people who promote raising walls change their opinion. But, with our heritage, we know that not only tennis nets, but sport in general, has the power to unite people. We hope to inspire people to reach out to their neighbours and do sport together instead of building walls.”

On average a tennis player swaps sides 13 times during a game. In this game, they weren’t allowed to.

Nicholas Berglund director Klaus Thymann was very excited to be a part of the project with such a strong subtext.