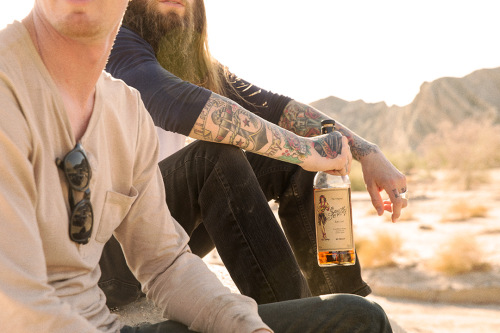 Sailor Jerry, the iconic American clothing brand and spiced rum inspired by tattoo legend Norman ‘Sailor Jerry’ Collins, has launched a new campaign celebrating the spirit of rebellion through an unofficial lineage of road trips, choppers, wild times and living outside the lines.

Rather than assemble a cast through traditional talent agencies, the Sailor Jerry team reached out to people in bars and motorcycle clubs to find people who lived the spirit espoused by the brand. “We rode out into the California desert, stayed up all night, found empty pools to skate in and filmed it on a Super 8,” explained Creative Director, Justin Pittney. Then we mixed it up with images inspired by our favorite cult films, found footage and the artwork of Norman Collins. For Sailor Jerry, these things are natural. Creativity and self-expression are a part of the brand ethos.

Before its release to the public, the $5 million campaign was previewed for the brand's community of 283k Facebook fans and 22k Twitter followers in early July, with a US national TV campaign aired on 7th of July on high-profile US cable channels. The campaign was created and produced by Quaker City Mercantile. It is supported by digital, print and outdoor advertising as well as social media activity across the brand’s digital channels.

Sailor Jerry Global Marketing Manager, Bronagh Hunt describes the campaign as “An expression of the spirit of Norman 'Sailor Jerry' Collins, whose legacy has influenced and inspired a generation of freethinkers. We’re proud to encourage people to live life their own way, just as Norman did.”

The 30 and 60 second spots are set to the classic Stooges' song, ‘TV Eye’, from their 1970 album, Fun House, and features footage from the legendary performance of the song at the Cincinnati Pop Festival dubbed by Rolling Stone magazine as “the great peanut butter incident” (during which Dead Boys frontman Stiv Bators handed Iggy Pop a jar of peanut butter, which he proceeded to smear all over himself).

Iggy Pop said: "I really, really like the Sailor Jerry spot with The Stooges music from T.V. Eye in it.  The edit and the upfront use really captures the purity and ferocity with which we played when we were at our best. Scott would have loved to have seen all the young people freaking out pogoing and going nuts to his drum beats.    I'm really happy for people to hear and see us in this way.  I like the tattoos too.  The whole thing is stone Stooge.”

Steadily building on its year on year growth, Sailor Jerry Spiced Rum increased its global volume to 931,000 cases in 2013. The brand has won numerous awards including Gold winner of The Rum Masters in 2013 & 2014 from The Spirits Business and has been recognized as one of the fastest growing spirits over the past few years, noted for spurring the global surge in popularity of the Spiced Rum category.